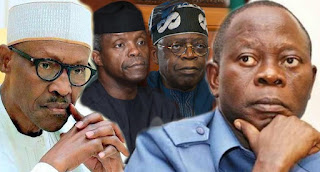 Barring any last minute changes, a leadership meeting of the All Progressives Congress will hold next week to determine the fate of the embattled National Chairman of the party, Adams Oshiomhole, Saturday PUNCH has learnt.
A prominent member of the party, who spoke on condition of anonymity because of the sensitivity of the issue, confided in one of our correspondents, in Abuja, on Friday that as a precursor to this meeting, the party’s National Leader, Asiwaju Ahmed Tinubu, and Oshiomhole, met in Paris, France, on Thursday. Tinubu had gone to France ahead of the President’s visit to the country.
It was further learnt that the meeting between Tinubu and Oshiomhole centred on the growing plot by aggrieved party members especially governors to remove Oshiomhole from office.
The former Lagos State governor is one of the party stalwarts backing Oshiomhole who is now under probe by the Department of State Services.
An APC source said, “Tinubu and Oshiomhole met in Paris on Thursday over attempts by governors and some members of the NWC to remove the party chairman. You will recall that it was Asiwaju who paved the way for the emergence of Oshiomhole as the chairman when Chief Oyegun wanted a tenure extension.
“Now that he has come under probe by the DSS and is being asked to step aside, he has run to Tinubu to save him. It remains unclear what their strategy will be to put a stop to the probe.”
It was also learnt that some aggrieved governors had begun reaching out to members of the National Working Committee to ask Oshiomhole to step aside pending the outcome of the DSS probe.
A member of the party’s NWC, who wished to remain anonymous for fear of retribution said, “The fact that Oshiomhole is under investigation for allegedly collecting money from aspirants is bad for the image of the APC government which claims to be fighting corruption.
“It is for this reason that the NWC members are being asked (by interested parties) to push for the suspension of the APC chairman pending the outcome of the probe. The President’s body language and actions in the coming days will determine Oshiomhole’s fate. For now, we are still considering it but we don’t want to make any hasty decision until we are sure that we have the President’s backing.”
Another party source said high-ranking party leaders would meet “next week” to decide the best way to proceed without “further depleting the party’s public image and goodwill.”
It was also gathered that President Buhari, who has taken charge of efforts to resolve the party’s post primary crisis, would be convening the meeting.
Apart from Buhari, those expected at the Abuja meeting include: Vice President Yemi Osinbajo, Tinubu, pioneer Interim National Chairman of the party, Chief Bisi Akande, the Minister of Science and Technology, Dr. Ogbonnaya Onu (as former chairman of the defunct All Nigeria Peoples Party), and Prince Tony Momoh (former National Chairman of the Congress for Progressive Change).