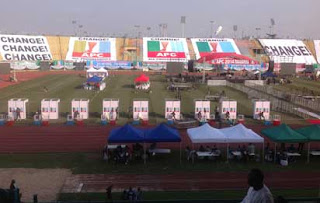 FACTIONAL chairman of All Progressives Congress, APC, in Enugu state, Deacon Okey Ogbodo, yesterday, condemned reports credited to a former governor of the state to the effect that 2019 polls will be war in the state, stating that it was a resort by political actors to heat up the polity.

Deacon Ogbodo who said that the statement was a ‘dangerous rhetoric’ lamented that instead of working hard to project the manifesto and rightful candidate of the party to the people so that they can win election, certain political actors are busy predicting doom.  According to him,  one should be particularly miffed that a former governor of this state was recently widely reported to have threatened that “2019 polls will be war in Enugu.  Why threaten people with war, instead of working hard to project the party’s manifesto and rightful candidates to our people so we can win fair and square?”

He continued: “I should think that instead of this dangerous and unwarranted rhetoric, these people who are supposed to be major stakeholders of APC ought to concern themselves with the challenge of solving the protracted leadership crisis in APC in the State which they clandestinely foisted on all of us for their-self serving insatiable greed for power and influence.

“I dare submit that the good people of Enugu do not need any form of this so-called “war” but peace, tranquillity and good governance.

“The team I lead does not and will not subscribe to any form of “war” against our dear people. The mandate party folks gave to us was one to change our destiny for the better, not wage of war. Loose, unguarded utterances like the one ascribed to the former governor is irresponsible and clearly unwarranted and must not be repeated or emulated.”