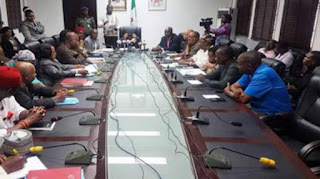 The Federal Government on Thursday opened negotiations with the Academic Staff Union of Universities at the Ministry of Labour and Employment office in Abuja over the universities lecturers’ strike since November 5.
The meeting, which began at 3pm and lasted till 9pm, was adjourned till next week, as the striking teachers and government did not reach a middle ground.
Our correspondent learnt that the closed-door meeting looked at the seven points in the Memorandum of Action signed in September 2017, and the two parties reviewed the highlights of the agreement
The ASUU delegation was led by its National President, Prof Biodun Ogunyemi, while the government side had the Minister of Labour and Employment, Chris Ngige; the Permanent Secretary of the Ministry of Education, Sonny Echono; and the Accountant-General of the Federation, Ahmed Idris.
The labour minister, during a brief session with newsmen before the closed-door meeting, apologised that “talks with the academic union are coming a bit late because we have been having negotiations on the new minimum wage.”
Ngige said, “The government appeals to ASUU to put the interest of the students first because they are at the receiving end of the consideration.”
In a copy of the 2017 Memorandum of Action, which was reviewed by the two parties, the issues of discussion included “funding for revitalisation of universities; earned academic allowances; staff schools; pension matters; salary shortfalls, Treasury Single Account exemption; and state universities.”
Ogunyemi, after the six-hour meeting, said the union had put forward its demands and the meeting had been adjourned till next week.
He said, “No date has been fixed for next week but we will communicate the date to you tomorrow (Friday). The union was forced to go on strike because our plea for the implementation of the 2017 Memorandum of Action fell on deaf ears.
“Our meeting with the Minister of Education (Adamu Adamu) in May and September 2018 to remind him of the Federal Government’s promises to implement the agreement yielded no result.”
Source: punch