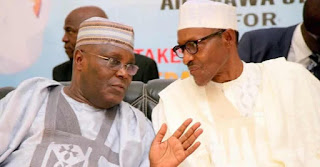 President Muhammadu Buhari on Sunday asked Nigerians to re-elect him in 2019, primarily to keep fighting the corruption war his administration started in 2015.

He also stated that his commitment to the provision of infrastructure, rebuilding the economy and sustaining the anti-insurgency war would be re-doubled if given a second opportunity.

Buhari spoke in Abuja at the unveiling  of his 2019 campaign document, titled, ‘The Next Level.’

The two-part document also showcased the achievements of his administration in the past three years, especially in the provision of infrastructure and tackling insecurity.

The President, whose speech was devoted more to corruption, noted that except the county was rid of the problem, it would get nowhere.

He stated, “To succeed, moral integrity and conscience must continue to form the dominant character of our nation and its leadership.

“Corruption is an existential threat to Nigeria. Despite the gains we have made in closing the gates, we know that there is still much ground to be covered to stop systemic corruption. We are committed to deepening the work we started this past term.

“The nation’s assets and resources will continue to be organised and utilised for the good of the common man.”

The President told Nigerians that they would either leave him in office to fight corruption or allow the county to return to the past.

Buhari added, “The next four years will be quite significant for our country. Nigeria is faced with a choice to keep on building a new Nigeria or to go back to its tainted past, which favoured the opportunistic few.

“Our choices will surely shape us, defining clearly, our economic security and our future prosperity. Nigeria, more than ever before, needs a stable and people-focused government to move the development of our county forward.

“Join us in this journey to the next level, for a strong and stable Nigeria…”

Buhari announced that at least 15 million new jobs would be created in the next phase of his administration if re-elected.

The President called on all candidates and political parties to be peaceful.

He said, “I urge all candidates and supporters of all political parties to go about their campaigns peacefully and decently. As I always say, we have no other country but Nigeria. Let us not set it ablaze because of politics of sectional interestss.”

At the event, selected ministers spoke on the “achievements” of the Buhari administration.

Fashola said work was ongoing on 365 roads. He stated that 244 of the roads were awarded in 2001 and abandoned, adding that Buhari revived them for completion.

The Minister of Transport, Rotimi Amaechi, praised Buhari for insisting that all the rail projects inherited from the administration of former President Goodluck Jonathan were not abandoned.

Also on Sunday, the presidential candidate of the Peoples Democratic Party, Alhaji Atiku Abubakar, formally released his policy document aimed at wooing voters for the 2019 elections.

Atiku categorises his mission into three: unity, security and prosperity.

Under what he tagged, ‘Refining and Petrochemical Infrastructure,’ the former vice- president promised to privatise all the nation’s four refineries if voted into office in February 2019.

He said the decision became necessary because the four refineries with a total installed capacity of 450,000 barrels per day had operated sub-optimally over time.

Atiku noted that the refineries had struggled to produce at 10 per cent of installed capacity.
He described Nigeria as the most inefficient member of the Organisation of the Petroleum Exporting Countries in terms of both the percentage of installed refining capacity that worked and the percentage of crude refined.