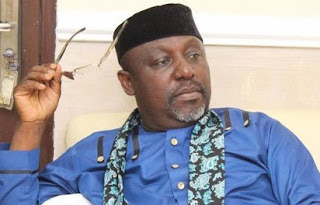 IMO State governor Rochas Okorocha, yesterday said he would support his son-in-law Mr. Uche Nwosu, for the governorship race in Imo, should he (Nwosu) join another political party.

Okorocha disclosed this  at the government House in Owerri, in an interaction with newsmen as part of what seemed to be his final decision on the controversies rocking the APC both at the national and state level.

The governor gave as one of his reasons for taking such a stand, adding that all his loyalists were treated unfairly as well as denied the tickets of the party during the last APC, primaries.

Okorocha who is Chairman of APC governors forum, also bragged that his was still the Senatorial candidate of APC for Imo West and would not dump the party.

He accused Oshiomhole of destroying the party claiming President Buhari was not aware of what he (Okorocha) termed injustices in APC.

Okorocha did not mince words when he said he would not support the governorship candidate of APC, Hope Uzodimma.

His words: “This administration is gradually winding down. We have surpassed the promises we made to Imolites. Over 90 percent of the projects have been completed but the rest of the 10 percent may be completed before the end of the political season.

“We have built six universities, four polytechnics and two colleges of education and one college of health.

“Along Douglas road, we are constructing two gigantic hospitals. We have completed justice Oputa court. We have also built couple of new government ministries in different locations in the state, some of them are near 80 percent completion.

“The most important thing now is that we pay salaries in advance.”

We have paid that of October.”

“So, when you look at what we have done it supersedes everything done by all the civilian governors in the past in the state, when we come we met about 13 dilapidated hospital but now we are handing over 30 brand new hospitals in the state.

While baring his mind on the political developments in the APC, he said: “I know most of you are aware of what is happening in APC, from the removal of Osita Izunaso, as the National Organizing Secretary and the coming of Adams Oshiomole as the National chairman.

“However, our party that is known for uprightness and justice which reflects the image of Buhari, has been dainted by the action of Oshiomole.

“What we saw in Imo is an example, where people who did not contest for the party’s primaries now   fly the ticket of the party in the state. I have not left APC. I will support Buhari for presidency.

“What they don’t understand is that in Imo, we don’t play party politics we play politics of individual. What they don’t know is that people join APC, because of me. I have done all I can to ensure that APC, members stay back in APC.

“I will not be surprised to see most of them who contested the primaries join other Politicial parties to pursue their ambition. I cannot stop them to join any party of their choice.

“Buhari does not know what Oshiomole, is doing. I have pleaded to those who want to join other parties to please support President Mohammadu Buhari for presidency.

“The politics of Imo state has changed now. It is no longer an individual controlling the politics.

“As a father of Imo state, I still remain in the best position to select the best among Emeka Ihedioha, Hope Uzodimma, Ifeanyi Araraume and Uche Nwosu who is the best among all of them. Nwosu believes in Imo state, he has investment in the state.

“In selecting who will govern Imo state, you look at the past record, their history and what investment they have brought to Imo state. I want to announce to you that I am still running for the Senator and my party is still the APC.
“All these people are used as instrument to fight me for 2023. It will not affect my victory in 2019. Let me also say this, my boys never intended to betray me. They were given fake hope.
“Hope has played them 419 and today they never got the governor and deputy. They were promised that they would be given the guber ticket to Owerri zone. And today, where is the ticket for Owerri zone. They lost it. They have given it to another person.”
On why he did not join other Southeast governors to visit President Mohammadu Buhari, he briefly said: “If there is anything the Igbo want to tell Buhari, I have told him.”
He also spoke on his view on the Vice Presidential slot of the Peoples Democratic Party, given to the former governor of Anambra state, Peter Obi,   Okorocha said: “The sympathy of Nigeria, for the Igbo will drop ones Southeast gets the Vice president.
“I am not against Obi running the Vice president but the Igbo people need the President and not the Vice President slot.”