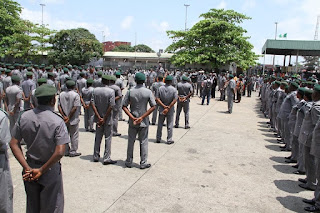 Following the failure of the Nigerian port system to accommodate the huge imports through the country’s waters, leading to diversion of cargoes to neighbouring countries, the land border route to Lagos end of the Nigerian market is now host to huge presence of security agencies’ checkpoints.

The proliferation of checkpoints along the Seme-Mile2 expressway, Lagos Badagry road in Lagos State, appears to have heightened with a gradual return of more security agencies that did not have checkpoints on the route before now.

Officers and men of the Nigeria Police, Nigeria Customs Service, NCS, Nigeria Immigration Service, NIS and the Nigerian Army, are now dot the land border road stretch of Lagos – Badagry Expressway. The development is also undermining the initial position of the NCS leadership which had drastically cut its presence at the border routes.

There were over 30 checkpoints mounted by the Customs before the directive of the Comptroller General of Customs, CGC, Col. Hameed Ali (rtd) that all checkpoints be  dismantled except the three approved ones at Gbaji, Agbara and the last between Badagry and Mowo.

A former Customs Area Controller, CAC at Seme had ordered the dismantling of all the checkpoints in compliance with Ali’s directive but  Vanguard Maritime Report  learnt the checkpoints began to resurface shortly after he was transferred.

Most senior Customs officers who spoke with  Vanguard Maritime Report  said all checkpoints have been banned and only patrols are allowed but they wondered if the patrol teams are the ones now mounting permanent checkpoints.

Before Ali’s directive, Police mounted several checkpoints but Immigration had none at all until the Ebola outbreak.

The  Federal Road Safety Corps, FRSC,  had no stationary checkpoint then but maintained a mobile stop-and-check while that of the Army only started surfacing shortly after the Customs directives and the Army officers at these checkpoints do not wear uniforms.

Vanguard Maritime Reports  recent trips from Agbara to Seme showed that from zero presence, NIS that is supposed to be stationed at the border only, now has about five checkpoints going to Seme and about seven on the return route.

For Customs, there are no checkpoints from Agbara to Seme but on the return journey, there are three before the notorious Gbaji and another five before Agbara, making it eight, contrary to the three ordered by Ali.

The checkpoints by the Customs are manned by different units of the Service; including the Seme border Command, Comptroller General’s strike force, Federal Operations Unit, FOU and others.

Gbaji checkpoint has become so notorious that motorists spend between 30 minutes to one hour to do less than five kilometre distance.

Vanguard also gathered that both the police and immigration have Seme Commands and border patrols respectively at Seme.

All military and paramilitary agencies that were not present on the route before are now maintaining checkpoints on the route.

In addition, amongst agencies, there is the Federal Road Safety Corps, FRSC, that collects N200 from each vehicle using a camp boy (civilian fronts) as collectors.

The FRSC has two shifts, morning and evening and drivers must pay the fare or get held for refusing to corporate as witnessed by  Vanguard Maritime Reporter.

There is also National Drug Law Enforcement Agency, NAFDAC, Quarantine Service and some other uniformed agencies. The Nigeria Civil Defence Corp is now pos Corp is now positioning itself at the opposite side when going to Seme. They were not on the route before now.

In addition to the governmental agencies another new development is the presence of large numbers of community youths mounting a checkpoint just before Gbaji where they also extort money from traders and motorists.

When contacted, Controller of Seme Command of the NIS, Dominic Asogwa, told  Vanguard Maritime Report, that he has received complains about the issue of multiple checkpoints and a task force has been constituted to check it.

It was however discovered that the officers do not wear name tags.

Efforts to get the reaction of the National Public Relations Officer, Joseph Attah, proved abortive as he neither picked our reporter’s calls nor respond to text message sent to him.