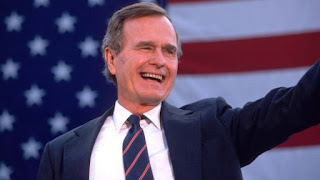 George H.W. Bush, who in one term as president reasserted the U.S. as the world’s lone superpower, rallying an international coalition against Iraq’s Saddam Hussein in the first Gulf War and presiding over the fall of the Berlin Wall and subsequent collapse of the Soviet Union, died on Friday. He was 94.
The announcement of his passing was made in a statement by his son, former President George W. Bush.
“Jeb, Neil, Marvin, Doro and I are saddened to announced that after 94 remarkable years, our dear Dad has died,” his son said in a statement released Friday night.

“George H.W. Bush was a man of the highest character and the best dad a son or daughter could ask for. The entire Bush family is deeply grateful for 41’s life and love, for the compassion of those who have cared and prayed for Dad, and for the condolences of our friends and fellow citizens,” the statement read.
Grandson George P. Bush said on Twitter Friday night, “He was more than a great man; he was a good man. His courage was matched by his compassion; and his dedication to country was equaled only by his devotion to his family.”
One of the most experienced public servants in U.S. history, Bush served two terms as vice president under Ronald Reagan before becoming president in 1989, capping off a career that included stints as director of the CIA and U.S. ambassador to China and the U.N. in the 1970s.
A longtime pillar of the moderate wing of the Republican Party — he was national chairman after the Watergate scandal left the GOP in disarray — Bush lent establishment credentials to Reagan’s conservative insurgency, becoming his running mate in 1980 after losing the presidential nomination to him.
But for all of the foreign policy successes of Bush’s lone term in the White House, it was a basic domestic issue that effectively undercut his shot at a second: his decision to raise taxes to address a deficit that had exploded under Reagan. Conservatives cried heresy, and repercussions still ripple through the GOP today.
Serving as president from 1989 to 1993, Bush and his wife, Barbara, who died in April, remained prominent public figures long afterward. They stood apart as a genial reminders of a political era that many Americans preferred to recall as more bipartisan and cooperative than perhaps it really was.