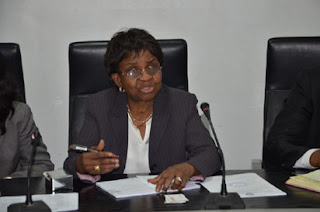 LAGOS—DIRECTOR-GENERAL of the National Agency for Food and Drug Administration and Control, NAFDAC, Prof Mojisola Christianah Adeyeye has disclosed that in the last one year, the agency intercepted 6.4 billion tablets of Tramadol with an estimated street value of about N193.38 billion on an average cost of N1.5 million per carton. Prof Mojisola Adeyeye Professor Adeyeye also disclosed that the agency destroyed 25 containers of Tramadol valued at N1.7 billion.

Disclosing this weekend in Abuja while presenting her one year anniversary speech, Director General of the Agency, Prof Adeyeye, said three persons involved in the distribution of the banned Tramadol have been arraigned at the Federal High Court, Lagos even as plans are underway to destroy more than 30 additional containers of Tramadol and other unregistered products worth more than N198 billion on the street.

Adeyeye said: “Little did I know that aside from substandard and falsified medicines issue, the unsafe and illicit drugs would become a significant part of my role as the Director-General of NAFDAC in safeguarding the health of the nation.“Since my assumption of duty, the new Director of Ports Inspection Directorate and his team have intercepted 86 containers containing Tramadol and other unregulated drug products.

These include 23 40-foot containers recently examined and found to have been loaded with Tramadol of various strengths from 120mg to 250mg. “Tramadol and other unregistered pharmaceutical products that are known to be injurious to the health of the public, most importantly our youth.

Prevention of these dangerous drugs from entering into the Nigerian markets would protect millions of youths from hazards of drug addiction that can pose threat to families, Nigerian workforce and the security of the nation at large.

This would have increased the number of casualties from insurgency, armed robbery and other social vices that are known to be the aftermath effect of use of illicit drugs.” Further, the DG said: “The Agency secured the conviction of one of the distributors and the court ordered the destruction of the seized consignment.

To further protect the health of consumers, the Agency destroyed fake, adulterated, counterfeit, banned and unwholesome NAFDAC regulated products worth N4 billion in exercises across the nation,  while also clearing its Apapa warehouses that had been filled to the brim since 2013. Noting that NAFDAC now has a new motto – Customer-focused and Agency-minded, the DG stressed that  eliminating substandard and falsified medicines, unsafe or illicit drugs, unwholesome foods, chemicals and other products was the Agency’s renewed focus.

“This is the crux of our regulatory activities and involves almost all the technical directorates. It starts from the Ports Inspection through Laboratory Services to Pharmacovigilance and to Investigation and Enforcement. “Removal of NAFDAC from the Ports from 2011 to 2018 worsened the problem of substandard and falsified medicines, illicit drugs and unwholesome foods in the country and portended real danger to the populace.

Through the support of the Presidency, Office of the National Security Adviser and my incessant awareness campaign about the implications of absence of NAFDAC at the Ports, NAFDAC was returned to the Ports in May 2018 and was also included on the inspecting MDAs in the Kaduna dry port in August 2018.”

0
Previous post Music: AKPOS DBT – SHAKU SHAKU
Next post Just in: Atiku is No Match For President Buhari, he will suffer bloodied nose in 2019 –Dambazau
Admin