Naijahitplay
PDP has nothing to offer, they rented Sokoto crowd from Niger Republic, El-Rufai alleges 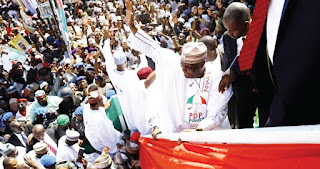 The Kaduna State Governor, Mallam Nasir el-Rufai, has alleged that the mammoth crowd that attended the Monday rally of the Peoples Democratic Party in Sokoto was rented from Niger Republic by the party.

El-Rufai, who made the allegation on Tuesday during the inauguration of the campaign council of the All Progressives Congress in Kaduna, said the PDP had nothing to offer Nigerians.

He described the PDP campaign inauguration in Sokoto as a gang-up of “thieves”.

El-Rufai said, “Thieves have ganged-up against President Muhammadu Buhari.  Yesterday, they were in Sokoto and they rented a crowd from Niger Republic just to show people that they have supporters because Sokoto people refused to come out.

“So, when it is time to launch President Muhammadu Buhari’s campaign in Kaduna, people should come for the whole world to see that, it is not Niger Republic people that are disguising as Nigerians.”

Speaking during the inauguration of the 69-member Kaduna APC Campaign Council, the governor noted that the 2019 General Elections were between patriotic leaders and those who went to Abuja to loot.

He said the APC government anchored its agenda on putting the people first, saying the government since 2015 had focused on running an “equal opportunity government.”

“We have tried to empower our people by anchoring our programmes on putting people first.

“We are making life better and reordering the priority of government to focus on human capital development.”

The governor claimed the APC government for the last three years had been fixing the rot the PDP left behind in its 16 years rule.

He added,  “The task in 2019 is to continue to work towards the uplift of our people. We cannot allow the people whose ideology is looting to return to power.

The PDP in its response accused El-Rufai and others of creating problems for the PDP while they were members of the party.

It said the rots created by the former minister at the Federal Capital Territory and others while in the party were being cleared by the National Working Committee of the party, led by its National Chairman, Prince Uche Secondus.

The National Publicity Secretary of the party, Mr Kola Ologbondiyan, who spoke with our correspondent on the allegations made by El-Rufai also dismissed the claim that the PDP imported people from Niger Republic for its North-West rally that held in Sokoto State on Monday.

He said it was sad that El-Rufai was now referring to the indigenes of the North-West who attended the rally as foreigners.

Ologbondiyan said the governor by his pronouncements had exposed the plan of the APC to allegedly import people from neighbouring countries to rig the general elections next year.

He said, “El-Rufai has exposed the plan of the APC to import foreigners for the forthcoming elections.

“He has spoken from the depth of his mind and unwillingly exposed the plan of his party and the Federal Government to bring in foreigners from Chad, Niger, Cameroun and even others, for the election.

“El-Rufai is callous.  These are the people that he and his party begged for support in 2015, but because hunger and poverty have made them to avoid the APC like a plague, they are now foreigners.

“That is fine. Let him know that the same foreigners will vote them out in 2019 with their authentic PVCs. They will use the PVCs to chase away hunger, poverty, killings, insecurity, favouritism and all forms of bad governance that El-Rufai and his party represent.”

On the claim that the PDP is populated by looters,  Ologbondiyan said, “This is ridiculous and funny. This same El-Rufai and others had their root in the PDP. He would not have even be known if not because the PDP brought him to limelight from obscurity and gave him appointments.

“The mess he and others like him created is what the Prince Uche Secondus -led NWC is clearing today.  Without the PDP, he would have been nowhere near the corridors of power.

“Anyway, since he has forgotten,  we will remind him. Here is a man who once described President Muhammadu Buhari as unelectable and not fit to rule. El-Rufai is a double agent. He is a fair weather friend. When Buhari is defeated next year, the man called El-Rufai will sing a new song.”