Comrade Benedict Godson, the party’s publicity secretary, alleged that the acts were carried out by PDP supporters

The publicity secretary of the party, Comrade Benedict Godson, on Wednesday, December 5, alleged that the damage was carried out by Peoples Democratic Party (PDP)’s supporters, The Nation reports


APC stated that it will henceforth bring to justice any culprit involved in defacing the president’s campaign posters and those of other candidates in the state. It claimed that this alleged move by the PDP is an indication that it is already on its way to defeat. 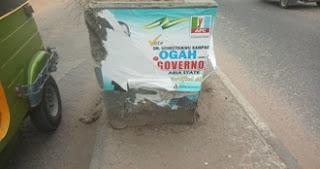 Photo of a defaced campaign poster of the governorship candidate of the APC in Abia, Uche Ogah (Photo credit: The Nation)

He remarked that the APC in the state is presently focused on sell ideologies of its candidates to the people and ensuring that the president secures the overall votes in the 2019 polls.

Godson said: “I want to advice our brothers in the opposition party that this is not the way that democracy is being played. I believe that they have seen that we have come to take over the state and I want to plead with them to gently hand over the mantle of leadership of Abia State to Dr. Samson Uche Ogah who has come to liberate Abia from bondage come 2019.

“Destruction of billboards and posters Mr. President, Uche Ogah and other candidates of the party is undemocratic and that cannot stop us from returning Mr. President Muhammadu Buhari who has done so well in terms of good roads, constant light, better life for Nigerians and Uche Ogah as both President and governor of the country and Abia State respectively.

“It is important to say that the PDP government that we have in Abia State has failed Abians in all ramifications.

“They owe teachers from primary to tertiary. The roads that they claim that they have built have caved in and they cannot justify the amount of money they claimed to have spent on such roads.

“The little that we are seeing in the state is being built by the Federal Government through the NDDC.


“We want to assure them that nobody has monopoly of violence and destruction of posters. We are warning the PDP to stop the destruction of our candidates’ campaign posters with immediate effect.”