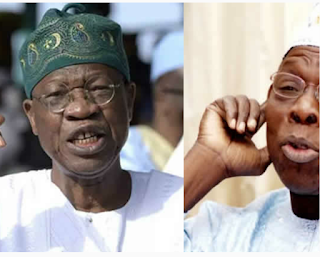 The Federal Government says though it is the constitutional right of the former President Olusegun Obasanjo to support a candidate for an election, his endorsement, will not guarantee victory.

The Minister of Information and Culture, Lai Mohammed, who spoke on behalf of the government on Monday in Abuja, said Obasanjo’s candidate for the presidential election “will be defeated roundly and comprehensively.’’

“With due respect to former President Obasanjo, it is his constitutional right to support any candidate of his choice and we urge him to go out and campaign vigorously for any candidate he wants to support.

“He has not hidden his preference for the PDP candidate, Atiku Abubakar, and we wish him very best of luck.

“However, I want to assure you that his candidate will be defeated roundly and comprehensively. It is not about endorsement; endorsement does not win election,’’ he said.

The minister also responded to a statement credited to the former president that, “only a fool will sit on the fence when his or her country is being destroyed with incompetence, corruption, lack of focus, insecurity, nepotism and brazen impunity.”

Mohammed said he held Obasanjo in high esteem and that the ex-president was probably not properly briefed on the development in the country to have made such conclusions.

“The facts are all there that this government has done more than any other government in three and half years.”

On corruption, the minister said that the government had put in place institutional reforms which had confirmed its sincerity and commitment to fighting the menace.

“It is not about putting people in jail, but what are the things put in place to address this endemic problem?

“Take the example of Treasury Single Account, which was not initiated by this government. It is only the Buhari administration that has the political will to implement it.

“Before we came in, there were over 22,000 government accounts in various banks.

“Since we came, we reduced it to one account and from 2015 to date, N8.9trn has passed through the TSA, which is as a result of transparency and accountability,’’ he said.

The minister said that even with lean resources, the Buhari administration had spent more on infrastructure than the 16 years of the PDP administrations.