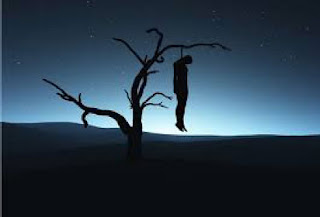 An eyewitness disclosed that Patrick, who hails from Ogoja in Cross River State, after killing his four children, locked their remains in the room and set the house ablaze at Alesa, Eleme in Eleme Local Government Area of the state.

Another eyewitness said the man may have strangulated his four kids, set his two-room apartment on fire and hung himself after he had chased his wife away that fateful night.

The wife, who had escaped the husband’s anger, reportedly raised an alarm which attracted several neighbours to the scene after he had killed the children.

The Public Relations Officer of Rivers State Police, DSP Nnamdi Omoni, said police are aware of the development, adding that corpses of the four children and Patrick have been taken for post-mortem.

Omoni said the landlord of the house where Patrick and his family were living, whom he simply identified as Gomba, has reported the incident to a police station in the area.

He noted that the children who are eight, five, three and a year old were killed and locked up in the room and the house set ablaze.

Omoni said: “In the early hours of today (yesterday) Mr. Gomba, the landlord of Mr. Patrick, reported the incident to the Police.”