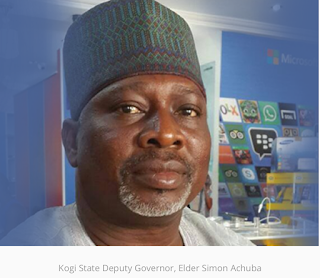 Kogi State Deputy Governor, Simon Achuba, on Sunday raised the alarm that his life is in danger following the withdrawal of his security details allegedly on the order of the state governor, Alhaji Yahaya Bello.

Achuba made the allegation at a press briefing.

He said he was shocked after returning from a trip to his village where he had gone for the Saturday’s scheduled elections to find the gate to his official residence empty without any of his security personnel.

He said, “I was surprised to see that all policemen attached to my house had been withdrawn. I then put a call across to the Commissioner of Police, Hakeem Busari, who also expressed shock and promised to give the matter an urgent attention.

“After about an hour, I called him again but he refused to pick my call. I sent a text message to him and up till now, he has not got back to me.”

The deputy governor called on the acting Inspector-General of Police to intervene so as to maintain law and order in the state.

He also called on the Federal Government to intervene in the affairs of Kogi State whose citizens, he claimed, had been subjected to hardship.

“When God gives you the privilege to rule a people, the people should not be taken for granted. You don’t have to use force for your policy to scale through if they are popular and people-oriented,” he said.

He said that the point of departure between himself and the governor was in the area of urging the government to do things according to the will of the people to which no one had been listening.

When contacted, the Director-General, Media and Publicity to the governor, Kingsley Fanwo, said it was not the state governor’s responsibility to post security details to the deputy governor.

He said, “It is not the responsibility of the governor to give security even to himself. The security heads do. So, the governor is not responsible for posting security to the deputy governor.

“So, if his claims are true, kindly get in touch with the security agencies to give explanations.”

When contacted, the state Commissioner of Police, Hakeem Busari, said he had promised to look into the matter.

He said, “He contacted me and I told him I was going to look into it and I am working on it to know what to do.

He explained that while police authority posts policemen to the Government House, the ADC to the governor is the one who deploys them.

He confirmed that the deputy governor requested two extra policemen prior to the withdrawal of his details.

He promised to supply the two policemen pending when the issue will be resolved.