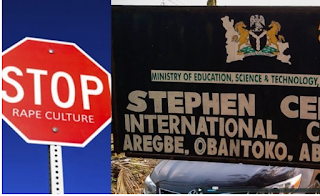 A Nigerian Pastor identified as Rev. Isaac Newton-Wusu, has been arrested and arraigned before an Ogun State High Court sitting in Isabo, Abeokuta, for allegedly raping minors at the Stephen Centre International School in Abeokuta, a school established some decades ago to serve as a shelter and educational facility for children, who were either orphaned or had lost either of their parents to violence in Kaduna, Jos and insurgency in different parts of the North-East.

The septuagenarian cleric who is said to be the Director of Home School, was accused of assaulting and raping some pupils of the school between the ages of 12 and 16 years. He reportedly raped one of the victims on four different occasions sometime in 2010 at his office in Abeokuta.

However counsel to the Pastor arrested for raping minors, Samuel Nwaji prayed the court to admit the defendant to bail on liberal terms. State counsel, Solomon Mareh, who insisted that the cleric was not who the defence counsel described him to be, said he had a penchant for tampering with witnesses.

Punch reported that the defendant was granted bail in the sum of N5m with two sureties in like sum, who must show evidence of three years’ tax payment. The defendant was ordered to be remanded in the Kirikiri Prison in Lagos pending when the bail conditions would be perfected, as the case was adjourned the case till April 4 for hearing of the preliminary objection to the suit.