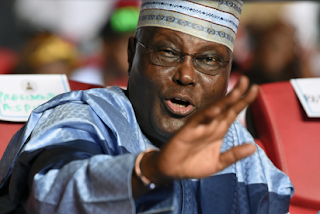 The Peoples Democratic Party Presidential candidate Alhaji Atiku Abubakar has decried the detention of his son in law and lawyer by the Economic and Financial Crimes Commission (EFCC).

Atiku in a Tweet on his Twitter handle on Monday said : ‘My son in law and lawyer have been detained, one for 3 weeks and the other recently. They are paying the price for supporting me. I urge those now persecuting them to remember that a government’s mandate is to pursue peace and justice for all, and not just those who support them.’ 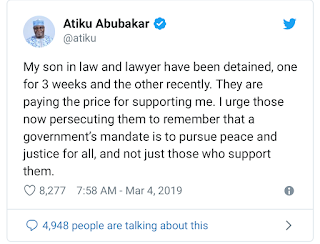 Atiku’s son in law, Alhaji Babalele Abdullahi was allegedly arrested by the Economic and Financial Crimes Commission (EFCC) according to the Media Adviser to the PDP candidate, Paul Ibe.

Ibe in a statement on Saturday said : ‘Babalele’s ordeal was part of moves to cajole Atiku into congratulating President Muhammadu Buhari who was declared re-elected by the Independent National Electoral Commission, INEC of the presidential election.

The statement by Ibe added that operatives of the anti-graft agency were not given access into the house until Babalele’s lawyers arrived. “The EFCC agents numbering about two dozen came in 2 regular vehicles, an 18-seater Toyota bus (registration Abuja CS 522 RSH) and a hilux van.

“However, they took away some documents of landed property. Not done, the EFCC officials stormed his Wuse residence where they again found nothing incriminating after the search “Afterwards, Babalele was taken away to the EFCC office in Wuse to make a statement alongside Mr. Lawan Ayuba,” the statement read.

The statement added that Atiku “recognizes the constitutional role of the EFCC and indeed any other agency of the government to carry out investigations, but will not be cowed by any attempt to blackmail him into mortgaging his mandate.