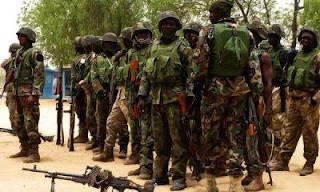 The Nigerian Army says it has begun a forensic investigation of a CCTV footage showing soldiers invading the home of the Rivers State Commissioner of Education, Dr Tamunosisi Gogo-Jaja.

The army said in a statement by its Acting Director, Public Relations, Col. Sagir Musa, that the military would remain neutral before, during and after the polls.

The statement read in part, “The Nigerian Army has observed some CCTV footages in circulation on social media and other online platforms, allegedly showing soldiers of the NA and other security agents invading the residence of the Rivers State Commissioner of Education, Dr. Tamunosisi Gogo-Jaja.

“The NA has started conducting a comprehensive forensic investigation of the footages to authenticate the validity or otherwise of the claims to guide its further actions.

“In the view of these allegations, the NA, for the umpteenth time, categorically reiterate its position in the entire conduct of the 2019 general elections as severally and consistently espoused and directed by the Chief of Army Staff Buratai which is – ‘NA is apolitical, neutral, impartial and will not compromise its constitutional roles under any guise’”

He explained that the army’s responsibility in the entire electioneering process is only to assist civil authority, Nigeria Police and other relevant security agencies to provide a secure, peaceful and enabling environment for the successful and transparent conduct of the election.

The army spokesman said anything beyond this is not authorised and therefore totally unacceptable by the leadership of the NA.

The statement read in part, “Any military personnel confirmed to be involved in any professional misconduct, such a person/s would be dealt with decisively in accordance with the law.

“To this end, the NA wishes to request well-meaning Nigerians to always forward genuine complaints and evidences of professional misconduct against any of its personnel for investigation and necessary action.”
Click here to watch video 1