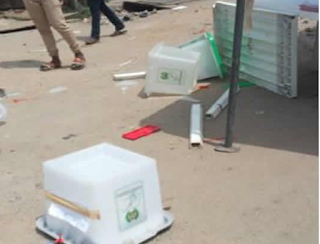 The News Agency of Nigeria reports as at the time of filing this report, that some hoodlums in fake Police and Army uniforms scared away voters at the polling units.

A staff of the Justice, Development and Peace Commission, Mr. Sunday Adwjoh, told NAN that many people from Karaworo polling station ran into the church premises for safety.

Adwjoh, who spoke on phone, said, “As we are talking, all of us are lying down to escape being hit by stray bullets.”

Also, at Oke Egbe Polling Unit 01 in Yagba West Local Government Area, a man was shot on the leg when some people invaded the polling unit to snatch ballot box and other materials.

The victim, identified as Mr. Tunde Oladipo, was said to have joined hands with others at the polling unit to prevent the armed thugs from snatching the ballot box.

NAN gathered that the invaders were, however, prevented from making off with the ballot box.