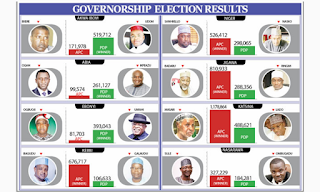 The Independent National Electoral Commission on Sunday started the announcement of the results of governorship and state Houses of Assembly elections held in the country on Saturday.

The results released so far revealed some surprises and upsets across the country. For instance, the ruling All Progressives Congress in Oyo State lost the governorship poll to the Peoples Democratic Party. The APC candidate, Adebayo Adelabu, backed by the incumbent Governor Abiola Ajimobi, lost scandalously to his PDP’s counterpart, Seyi Makinde, with a margin of 157, 635 votes. While Makinde polled 515,621 votes, Adelabu came second with 357,982 votes.

Also, as it was during the February 23 presidential and National Assembly elections in Kwara State where the incumbent Senate President, Bukola Saraki, lost his bid to return to the Senate, his party lost all elective positions in the March 9 polls.

0
Previous post OMG: MEET GENEVIEVE NNAJI’S DAUGHTER WHO GOT MARRIED BEFORE HER MOTHER (PICTURES)
Next post Shocking as Woman gives birth to a boy at her polling unit in Rivers State ( Video)
Admin