Just in: Four rescued from another Lagos building collapse 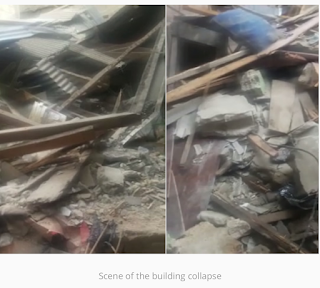 Four people have been rescued from a building that collapses on Lagos Island on Monday evening.

When  our source visited the site of the incident at Egerton Square in Oke-Arin area of Lagos Island, the four men trapped under the rubble had been rescued and taken to the hospital.

According to chairman of the Community Development Committee in Lagos Island LGA, Buhari Maleek, the only casualties involved in the collapse were four men who were involved in the demolition of the building and they’re presently receiving treatment at the Lagos Island General Hospital.

He said, “The building was marked for demolition in 2016, but it was not demolished.

“Following last week’s building collapse at Ita Faji area, officials of the Lagos State Building Control Agency came on Saturday to mark it for demolition and ordered all shop owners to move out their goods before Monday.

According to a barber, Akinloye Abduljelil, who owns a shop close to the scene, it was in the course of demolishing the building from the ground floor that it collapsed on the men who were brought to demolish the building.

Abduljelil said, “They came in this morning, brought eight Hausa men and started demolishing the building, four of them were under the building when it collapsed on them, two were rescued without any serious injury, while the two others who sustained injuries have been taken to the hospital.”