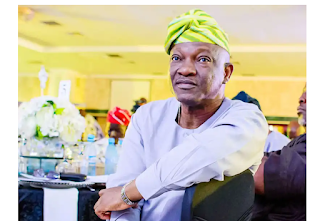 Femi Fani-Kayode a former Minister of Aviation has just revealed that Jimi Agbaje, the Lagos State governorship candidate of the People Democratic Party (PDP) in in the just concluded gubernatorial polls, has dumped the party.

Fani-Kayode, who let the cat out of the bag via his verified Twitter page on Wednesday, said that Agbaje dumped the party due to a disagreement with the party leadership in the state. He stated that it was Musiliu Obanikoro that left the party first, then Iyiola Omisore, Gbenga Daniel and now Jimi Agbaje.

Fani-Kayode wrote: “First it was Musiliu Obanikoro, then Iyiola Omisore, then Gbenga Daniel and now Jimi Agbaje. All my closest friends and brothers are abandoning ship and leaving @OfficialPDPNig! Ouch!
See his tweet below.

@realFFK
First it was Musiliu Obanikoro, then Iyiola Omisore, then Gbenga Daniel and now Jimi Agbaje. All my closest friends and brothers are abandoning ship and leaving @OfficialPDPNig! Ouch!

1,242 people are talking about this
Online reports have it that Agbaje has deserted the party over unsettled differences between him and the leaders of the party in the state. According to reports, Agbaje in a statement announced that it is necessary for him to quit the party after a series of accusations that came up after the party lost the Governorship election to the ruling party in Lagos State.

Agbaje said “I have tried to remain focused and ignored all the distractions coming from the leadership of the party. I am making the decision after due consultation with my supporters and loved ones for the sake of peace. Agbaje, however, did not give details whether he will join another party.

Tunji Shelle, a former Chairman of PDP in Lagos State, has also levelled allegations that Agbaje was responsible for poor performance of the PDP in the just concluded Governorship election in Lagos State.
Shelle explained that: “We have a situation where somebody said he could work and achieve victory alone. Meanwhile, he doesn’t know anything.

“Rather than show cooperation, he was arguing and fighting people who could help him. Even when things were going bad and help was to be rendered, he said he doesn’t need help.

“Well-meaning people intervened to rally everybody together in Lagos. They called us to a meeting and asked us to help him but he refused, saying he doesn’t need help. He became a lone ranger and stand-alone person.

“Even when we were trying to reinforce his campaign team, he told us point blank that he couldn’t work with people he can’t control. He wants to be a master of all and subject everybody in the party under his control which is not possible. You can’t control everybody because PDP is not your private party.

“So, we decided to leave him to go and do the job alone and at the end of the day, that is the result we got in Lagos. That is the major reason why PDP failed in Lagos. “If not for the sympathy votes we got from people who are tired of APC and felt there is a need for leadership change in Lagos state, we could have gotten lesser votes in the governorship election. To be frank, our governorship candidate was our problem in Lagos state.
“He defeated the party and defeated himself. The most unfortunate thing is that he doesn’t feel the pain of what he has caused. Also, there was mismanagement of resources too because everybody left him to his fate to do whatever pleases him”.