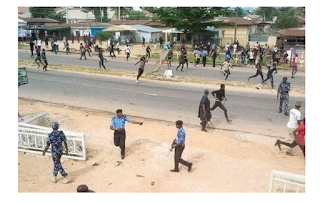 The Independent National Electoral Commission, INEC, has halted the collation of the supplementary Governorship election in Kano State after results collation in Nasarawa Local Government Area got disrupted by thugs who tore results sheets and almost injured the Electoral Officer.

Results from 21 Local Councils have been collated already, and it saw the incumbent Governor, Abdullahi Ganduje, of the All Progressives Congress, APC, shrinking the 26,655 vote gap between him and his challenger, Abba Kabir-Yusuf, of the Peoples Democratic Party, PDP.

Briefing Journalists, Observers and party Representatives at the State INEC Office, Shehu said: “As we were waiting to reconvene with the intention to continue with the collation, we heard a disturbing report that just as they were about to conclude, results collation in Nasarawa Local Government were disrupted, and the result sheets torn away, and there was a lot of commotion, and the Police had to rescue some people. As it is now, we do not have the results, and even the E.O. (Electoral Officer) had to be rescued. Luckily, nothing happened to him. He was saved from the crisis.

“But the intention of the Commission is that we are going to refer to our primary and secondary data of results, that were collated from the polling units, as well as the ward level. When we get the results in the presence of all the representatives of political parties, we will regenerate the results, and we will confirm those that are acceptable within our laws and guidelines, and those that have to be cancelled, because the Card Readers will have to be referred to as well. Based on that, we will have genuine results, and we will complete the collation for the State Governorship election”, he said