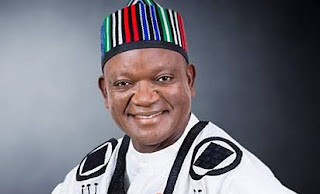 The Benue chapter of the All Progressives Congress (APC), has rejected the outcome of the Governorship election declared on Sunday, in favour of Gov Samuel Ortom of the Peoples Democratic Party (PDP).

The party said in a statement on Sunday in Makurdi that the results did not reflect the wishes of the people.

The statement signed by Prof. Eugene Aliegba, Secretary Jime/Ode Campaign Organisation, said that APC would challenge the results in court.

The Independent National Electoral Commission (INEC), on Sunday declared Ortom winner of both the governorship and supplementary polls conducted on March 9 and March 23, to determine the Benue governor.

The statement declared that the outcome of the poll was “totally unacceptable to the APC”.

It, however, thanked those who voted for Jime and Sam Ode, the party’s governorship and deputy governorship candidates in the election, and prayed God to reward them for their trust and confidence in the team.

“When we embarked on this journey many months ago, it was to translate to reality the dreams of a better future for our suffering people.

“We toured the entire state and made our case for wealth creation through agriculture, education reforms, infrastructure development and a welfare package for our senior citizens.

“We told our people of our plans for improved capacity and welfare for civil servants, and a health policy that covers all Benue residents.

“Our messages resonated with the electorate because they could tell that our projects were about service, not hinged on intent to occupy office for the sake of it.

“But, even as the results declared did not appear to reflect the will of most of these same people, we call on our supporters to remain calm and law abiding as they had been throughout the campaigns and electioneering period.

“They have our full assurance that as a party that believes in democracy, we will not accept a stolen election,” it added.

The statement implored the party faithful not to waver in their trust on the party to reclaim is mandate.

“Going into this contest, we were well aware of the fact that only one of two outcomes was possible – either we win fairly in line with the massive support we earned from the people, or another winner emerges through a credible and transparent process.

“We did not anticipate a third option that confers advantage to those who play dubiously outside the laid down rules of the game,” he said.

“We will make a case before the Elections Petitions Tribunal to subject the Benue governorship elections result to an integrity test. If we opt otherwise, we will be as guilty as those who undertake acts that undermine democracy.

“We have chosen to take action that insulates democracy from practices that threaten it,” the statement said.

The party, therefore, urged its members and well wishers to remain calm and refrain from acts that would jeopardise the existing peace in the state. (NAN)