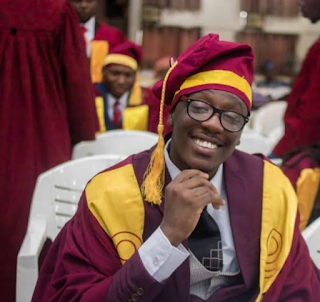 Gloom has enveloped Omolade Osinowo Street in the Mafoluku, Oshodi area of Lagos following the gruesome murder of Stephen Urueye, a resident medical doctor at the Lagos University Teaching Hospital, Idi Araba, by some hoodlums on Thursday evening.

The street in Mafoloku where family members of the young man reside has since turned into a Mecca of sort with sympathisers of all kinds trooping in to commiserate with the household.

Saturday PUNCH learnt that Urueye was on housemanship at the hospital and was to finish the programme in December 2019 when the incident happened.

The 25-year-old was reportedly seeing off a friend, who visited him at his lodge around 9:00pm when he was attacked by the hoodlums along the Canal area – a route near the campus said to be notorious for robbery attacks.

Our correspondent gathered that the assailants stabbed him in the thigh while trying to dispossess him of his phone and ATM card and left him for dead.

He was said to have been rushed to the emergency section of the teaching hospital by passersby, who saw him groaning with pains at the scene of the attack.

The young man died at the hospital in the early hours of Friday, throwing his family, friends and colleagues into deep mourning.

His distraught mother, Aderonke, and siblings were inconsolable when our correspondent visited the family on Friday afternoon.

Rolling on the floor as those around made spirited efforts to console her, the woman cried profusely, singing songs of worship to God in the process. When she finally found her voice, the words that she uttered broke the heart.

“Stephen was a covenant child,” she said. “I gave birth to him at an old age. I went through hell during his delivery. It was through a Caesarean Section.

“As my only son, I had hoped he would get married and live with me with his wife and children. Death should have taken me instead of my only son,” she added painfully.

Pausing for a few minutes and rolling on the floor again, the heartbroken woman let out her pain the more. The entire room was filled with grief.

“My son was a gentle boy. Only a few people knew him on the street where we live because he was easy-going.

“I want to see the killers of my son and ask them what I did to deserve this type of thing from them,” she said.

There was confusion around 8:00pm when the mother of the victim saw the news of her son’s death on television. The sight of his photograph forced a stream of tears down her cheek. She soon passed out, leaving everyone in the living room panicky. It took the intervention of sympathisers to revive her.

Elder sister to the deceased, Amina, told our correspondent that her brother had attended the convocation of his friends on Wednesday before he was gruesomely murdered the next day.

Fighting back tears, she said she wished Urueye was alive even if it meant losing one of his legs after that attack.

“He was inducted last December and had commenced his housemanship. He was supposed to finish in December 2019.

“He took the picture being circulated on the social media during his induction. He was a gentle and respectful brother. He was God-loving and brilliant. We will miss him a lot,” she said.

Another sister of the victim, Memunat, said she chatted with him some hours before the incident, adding that she would miss him sorely.

“We were very close. We still chatted yesterday (Thursday). He wished to be a prominent doctor but all of that dream is gone now,” she said.

In the wake of the incident, colleagues of the deceased and hundreds of students trooped out on Friday to protest against the lack of security around the campus.

They lamented that the scene of the incident had become a hot spot for years, with many students falling victim to robbery attacks.

“There have been incidents like stabbing and beating of undergraduates in the past, but we have not lost a life before.

“Urueye’s death was quite tremendous and almost all the students in the school was around for the march. Doctors and students are not a danger to them, so they should stop attacking us,” he said.

The Lagos State Police Public Relations Officer, DSP Bala Elkana, in a statement said two suspects had been arrested in connection with the incident, adding that the state’s Commissioner of Police, Zubairu Mu’azu, had directed that the case be transferred to the State Criminal Investigation and Intelligence Department, Panti, for further investigation.

“On April 4, 2019, around 9.45pm, Itire Police Station received a distress call that some hoodlums armed with knives attacked one Dr Stephen Urueye, a resident doctor with LUTH and dispossessed him of his valuables such as handsets. They equally stabbed him at his right thigh and back.

“The victim was rushed to LUTH, Idi Araba, where he eventually died in the early hours of Friday. Two suspects namely Gbadebo Jimoh and Malik Adeboye, have been arrested in connection with the case.”

Provost, College of Medicine, Prof. Afolabi Lesi, told our correspondent on the telephone that the school authorities were working with the police to find a lasting solution to the security issues in the area.

He said, “We have strengthened security on the campus. The incident happened outside campus.

“We are between high-density areas that are noted for hooligans and cult activities. We are in touch with the local police. That is why we have a police post on the campus to respond to attacks.

“This attack is sad. The victim was cut short at the prime of his life. He was our former student and our heart goes out to his family. We are reviewing the security arrangement around the campus.”
Source : punch