Video: Man caught his wife on camera having s*x with another man 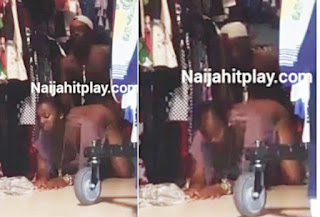 Promiscuousity and infidelity among romantic partners has become the order of the day in this present generation, and it’s goes beyond casual dating or premarital romantic relationships, as a lot of married people today also indulge in unscrupulous sexual acts. For most people in relationships nowadays, either in marriage or courtship, seeking sexual gratification outside the shores of their relationship stems from so many reasons, but in most cases, it’s either factored by their partners’ inability to satisfy them sexually or their perpetual wanton for sexual adventure.In the case of a woman whose sex tape recently surfaced online, it is the former, as she is said to be married to an older man who apparently cannot give her the level of sexual gratification she craves, and as a result resorts to ‘recruiting’ younger men for sexual pleasure. According to our sources, the woman owns a boutique set up for her by her husband, and it’s in this particular boutique that she brings in young men to have sex with. Also according to our sources, the husband who had been suspicious of her immoral acts decided to set a trap for her by installing a hidden camera inside the boutique, and unfortunately for the woman the camera served it purpose. The woman brought in another young sexual partner, and this time all their ‘activities’ were caught on camera. The husband got hold of the video and decided to post it on the internet to teach other married women a lesson…P. SMarried people should be religiously faithful to their partners as it’s the hallmark of their lifetime commitment! (Ademola Adeyemi | Peter madojemu @naijahitplay)


Watch video below (available on chrome and other high browsers)

If you are directed click here ..(note video available for only high browsers like Chrome, Mozilla etc)

One thought on “Video: Man caught his wife on camera having s*x with another man”

Previous post The Federal Goverment promises to provide Nigerians with Free Internet access – Could this be true?
Next post Xenophobia Attack: 2 Nigerians stabbed to death in South Africa
Admin