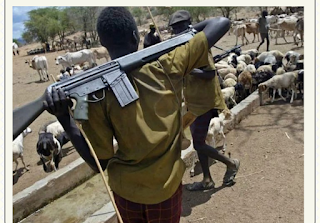 Armed men suspected to be herdsmen, at the weekend, invaded Anambra West Local Government Area of Anambra State, leaving six people dead, some of them beheaded, on their trail.

An eyewitness, Mr Orjiako Nnaluo (Ideh Anam), who spoke to journalists, said that the herdsmen stormed farm settlements known as Agweopia Camp, Iyiogbu Camp and Iyinkolo, respectively around 5:40am and started killing people, burning houses and raping many women.

Mr Nnaluo said before people of the area could know what was going on, the herdsmen had killed six people, leaving about 30 others with various degrees of injuries.

The injured, he said, are currently receiving treatment at an undisclosed hospital.

He called on the Anambra State government to quickly come to their rescue, saying that all the local farmers had all deserted the area.

He said that the farmers were trying to recover from a previous attack by the herdsmen, which he said claimed three lives.

He said the governor of Anambra State, Chief Willie Obiano, was aware of the case and had promised to resolve it.

Speaking on the incident, the Anglican Bishop of Mbamili Diocese, the Rt. Rev. Henry Okechukwu Okeke condemned the killings by the attackers, describing it as unfortunate, obnoxious and inhuman.

“This is a very unfortunate incident because these are core farmers. They are the food basket of Anambra State. Definitely, it is going to affect not only the economy of our state, but the country generally. It has been confirmed, I got the news this morning about the killings. Now, following the incident, farmers have left their farmlands. The Fulani people are also on the run. So, it is an unfortunate situation. I want to say it clearly that the Federal Government has the key. They must not sit down and watch people being killed by the herdsmen and their farms being destroyed. But Fulani men have been around here for some years now, but the recent destruction of farms has brought about unhealthy situations.

“The Federal Government actually has to do something. They should summon the leaders of the herdsmen and the rest of them. I think with that this fire can be quenched now. The government of Anambra State instructed farmers through their Igwes to allow herdsmen graze their cattle, but the word ‘allow’ must be interpreted because when you say allow, what do you mean? Is it to allow them to graze and destroy farms crops? Is it to allow them to continue to cause trouble? If you allow someone to stay in your land and do his business, there must be restrictions, there must be a border line, of course, you know that 99.9 per cent of Anambra West are farmers. They are farmers or do you expect farmers to fold their arms and watch the herdsmen kill them and destroy their farms? Anambra West is a hospitable environment people who are so much accommodating. They have accommodated the herdsmen over the years, who have turned against them, killing and maiming their hosts, “ the Bishop said.

He, however, advised the youths of Anambra West not to take the laws into their hands even as he called on the stakeholders to intervene, adding that Anambra West was vibrating as the youths have now prepared themselves against sudden attack by the herdsmen.

Bishop Okeke further decried the lack of presence of security men in the council.

In the same vein, the Anambra West Youth President, Mr John David called on the youths to remain calm and law-abiding, noting that the issue would soon be resolved.

When contacted on phone, the Anambra State Police Command Spokesman, Mr Haruna Muhammed (SP), said: “How do you know they are Fulani herdsmen? The attackers are not confirmed yet. There was an incident at Anambra West Local Government Area and police are still investigating it.”