The National Chairman,  All Progressives Congress (APC),  Adams Oshiomhole, says the governing party is focused on delivering good governance to Nigerians rather than 2023 elections. 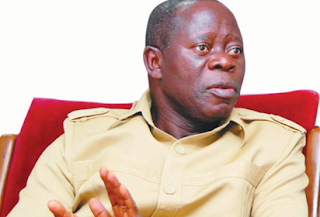 Oshiomhole said this in Abuja on Thursday at a Reconciliation Meeting with the party’s stakeholders and aggrieved governorship aspirants from Bayelsa.
Posters of APC chieftain, Bola Tinubu, Gov. Nasir El-Rufai of Kaduna State and the APC National Chairman, Adams Oshiomhole had been sighted in some parts of the country lately ahead of 2023 poll.
“I want to completely disassociate myself and members of our party from all those posters.
“We believe that these are the handwork of Peoples Democratic Party (PDP) who think that they can create suspicion within the rank of APC by using some elements to print posters to create a complete diversion. “So, I stand here as National Chairman of APC not only to deny those posters as they affect me but to deny those posters as they affect any leader of our party because it is not yet time,” Oshiomhole said.
Also read: PDP mocks Buhari’s Presidency over the arrest of Nasir Danu at UK airport
According to him, even people who may have ambition are aware that this is not the time.
“At this point in time, all hands must be on deck to support President Muhammadu Buhari and all our state governors in their respective states to work together unanimously to deliver deliverables for the good of our people in the states and at the Federal level.”
Oshiomhole said that politics could not be an all-round season, saying that the season for politics was over.
According to him, the judiciary is clearing the governorship, the National Assembly and even the presidential elections.
“Once these are done and put behind us, I expect all Nigerians to insist that those elected should go back to work and deliver and justify the mandate they have been given.
“This is not the time for electioneering. We cannot have electioneering for four years and thereafter you have people elected and continue for another four years.
“There is no the time for politicking, there is time for governance, this is the time for governance,” Oshiomhole said.