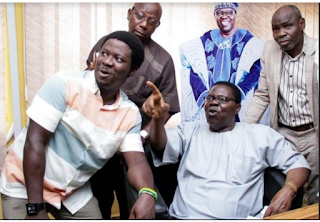 Evangelist Ebenezer Obey (MFR) at the event, excitedly pointing at some relics of his musical performances in the museum to the curator, Oludamola Adebowale (left).

The gallery dedicated by Dr Olakunle Filani, a former Provost of the college, houses the mini-museum and ancillary facilities aimed at immortalising eminent personalities who have contributed to the development of the college.

Stating the objective of the initiative, the curator, Oludamola Adebowale remarked, “This is a presentation to showcase the unique artistic life of Evangelist (Prof.) Ebenezer Oluwaremilekun Olasupo Aremu Obey-Fabiyi (MFR).  It is also aimed at immortalizing him. All the items in this space were personally supervised and handpicked by myself and Baba Obey.

The idea is not just to create inspiring works for posterity, but also to inspire the younger generations and students of this great institution that they can also achieve greatness”.

Oludamola, the Creative Director of Wildeye Creative Solutions Ltd revealed that the legend has focused on using music to promote his cultural heritage since the mid-50s. Songs like “ Ota mii dehin le yin mi,  Oro Oluwa Ede,  Board Members, Eniri Nkan e, Ori m koniburu and “Egba” portray Baba Obey as a music legend, a man who is also a proud promoter of his  cultural heritage.

The revered evangelist donated items worth millions of naira to the school in response to its request for his personal effects to equip the museum space designed in honour of select prominent sons of Ogun State. Speaking on the occasion, the legendary music maestro said, “The journey of my life has been a source of testimony and inspiration.

I was conceived in Idogo, born in Massey Hospital, Lagos Island, raised in Idogo and Abeokuta. I know this museum space will be of immense benefit and a source of inspiration to the students of the school and future generations who will find motivation in my story and journey through life. I donate these items to the school in good faith and hope that posterity will serve us well as we try to preserve our history for the benefit of generations to come”.

Deputy Provost, Dr. Rafiu Soyele, remarked that the eminent musician was the first to respond to the institution’s call for personal effects to establish an archive of the exploits of prominent citizens of the state.

As he formerly handed over the priceless valuables to FCE, Abeokuta, Obey declared, “I dedicate these items to the memory of my parents. Most especially to my  mother, Mrs. Abigail Oyindamola Abeke Fabiyi (Nee Toriola) from Owu quarters in Abeokuta, and to my father, Chief Nathaniel Olasewo Fabiyi from Kesi, Abeokuta and to the glory of the Almighty God who has been my source of strength all these years!” While commending the school for taking the initiative to establish the museum, Evangelist Obey harped on the need to inculcate a sense of history in younger generations. Items showcased in the museum booth are Obey’s personal effects, record labels, stage costumes, relics of musical performances and pictures chronicling his trajectory from childhood.

Despite going through the crucible of social change, Obey’s lyrics remain evergreen and relevant decades after their release. The legend explained this uncommon phenomenon in the industry thus, “I’m almost 78 years old now.

Songs I wrote at 40 still thrill people today. When I compose songs I ask myself: What will the people gain from this, how will it positively affect their lives and are there lessons or prayers for them? People like prayers.

When you pray for them they join.” This assertion was validated by the instantaneous reaction of the mammoth crowd that thronged into the museum space as the music icon reeled out tunes from his inexhaustible repertoire. The fans excitedly cue in, singing along as he effortlessly crooned select songs like Aimasiko, Ketekete, Obey Commander and Ara Nbada to their delight.

The ace curator who recently curated the Wole Soyinka @85 Exhibition, Timeless Memories: A Decade of Iconic Celebration enthused, “Curating this Museum Booth for an iconic figure like Evangelist (Prof.) Ebenezer Oluwaremilekun Olasupo Aremu Obey-Fabiyi (MFR), is nothing but a privilege I would forever cherish. It’s not just about telling the story of his selfless and legendary life, but also witnessing his accomplishments, struggles and success at the same time.

Earlier this year, I had the opportunity of curating the Festival Exhibition for the Ogun State Government during the 2019 African Drum Festival. The festival was in honour of Evangelist Obey-Fabiyi and other icons from the state. My journey with him started after that successful showcase.”