Lagos Baby factory: I received N15,000 for each delivery – “midwife” 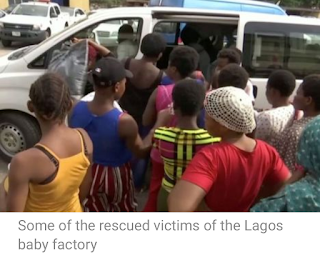 A 54-year old woman who acted as a midwife at the baby factory in the Ijegun area of Lagos state, Sherifat Ipaye, disclosed that she collected N15,000 for each delivery, while her partner in crime, Happiness Ukwuoma was paid N20,000 monthly, with free accommodation.

Her job specification according to her, was to take care of the ladies and move them to Ipaye’s place whenever they were due for delivery. Her husband according to her was aware of the shoddy deal, as he was alleged to be assisting in bringing the girls down from the eastern part of the country, in connivance with a driver of a popular transport company.
Residents react

When Vanguard visited one of the baby “factories” in Ijegun, one of the residents, who simply gave her name as Modinat, said “the occupant of the two-bedroom flat moved in three months ago. They were not on talking terms with us, but we started suspecting all was not well when we noticed all the girls there were pregnant. They only came out when they wanted to fetch water.

We had no choice but to inform the police, only to discover the place was used as a baby factory”.

At Hassan Adeola street, where two ladies were rescued, a resident, Mrs. Adanne Jocelyn told crime guard that “it was the owner of the house who visited two weeks ago, and discovered that her property had been converted into a baby factory. The gate of the building was always locked from outside to make people believe that the occupants had gone pout”.

However, on the day the landlady visited the compound with her daughter, they knocked for close to thirty (30) minutes before the gate was opened. While inside she refused to raise alarm for fear of being killed. By the time she came out, she called her agent who is in charge of the property to notify him of her discovery.

She immediately sent a message to NAPTIP on the activities of her tenants. But that same night, the pregnant girls were relocated to another location. By the time the Police and NAPTIP officials arrived at the building, they had moved the girls to SMART Hotel, where they were eventually apprehended”.