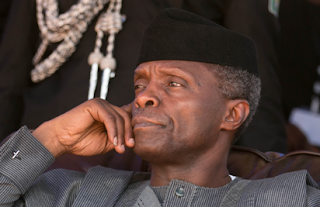 Vice President Yemi Osinbajo has again called on Nigerians to assist the President Muhammadu Buhari administration in its fight against corruption, lamenting that the country cannot develop with corruption pervasive in all spheres of life.

Vice President, Professor Yemi Osinbajo
Osinbajo stated this Thursday in Abuja through the Special Adviser to the President on Rule of Law, Office of the Vice President, Fatima Waziri-Azi at the public and media launch of FLAG’IT – an application created by the Akin Fadeyi Foundation with support from the MacArthur Foundation for reporting corruption.

He maintained that very few countries in the world have low level of corrupt practices, arguing that there is a consensus that corruption and illicit financial flows out of Africa relentlessly delay the attainment of the development goals.

Osinbajo stressed that no matter the level of wealth a nation has, its people may never reap the benefits if corruption is not effectively tackled, adding that there was a nexus between corruption and poor development.

“The 2019 Global Corruption Barometer on African citizens’ views and experiences of corruption highlights that while most of the people surveyed in 35 countries felt that corruption had increased in their country, a majority equally felt that they as citizens could make a difference in the fight against corruption.

“Only a few countries in the world can claim to have low levels of corruption and none of these countries are in Africa. There is a consensus that corruption and illicit financial flows out of Africa relentlessly delay the attainment of the development goals, worsens practically all Human Development Indices and trap the majority of her people especially the most vulnerable in a trap of misery and poverty. It does not matter how much revenue a country generates or how transformed it is or progressive its plans are”, he said.
Osinbajo insisted that President Buhari-led administration has decided to make the fight against corruption its first priority because there was a need to ensure equitable distribution of wealth.

According to him, it is a known fact that the period that Nigeria received the highest oil revenues was the same time that it witnessed the highest level of corruption.

He commended the Akin Fadeyi Foundation and the Federal Road Safety Corps for partnering to fight corruption on the nation’s roads through the use of the app, adding that Federal Government would continue to encourage technological innovations.

On his part, Chairman, Presidential Advisory Committee Against Corruption PACAC, Prof. Itse Sagay SAN, noted there was a need for Nigerians to join the fight against corruption.

In his speech titled: ‘The Fight Against Corruption: A Collective Responsibility’, the PACAC chairman said the political space is still producing billionaires overnight at the expense of the masses.
kidnappers demand N60m ransom for 6 victims in Adamawa
According to him, “Corruption hurts economies, people, and governments; hence, there is the need to involve everybody in the fight against all forms of corruption in our society.

“Incidentally, there cannot be a better time to join in the fight against corruption than now when the political economy continues to produce overnight billionaires and reactionary leaders by the day.”
Also speaking, the Corps Marshal, Federal Roads Safety Corps FRSC, Mr Boboye Oyeyemi, said the FLAG’IT app would go a long way in curbing the rate of corruption in the country.

The FRSC boss said the commission was determined to rid itself of corruption, hence, its decision to partner with the Akin Fadeyi Foundation, calling on other government agencies to take advantage of the anti-corruption app to make Nigeria a better society.