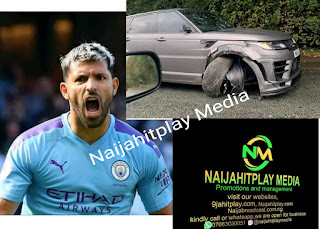 Manchester City striker, Sergio Aguero, was on Wednesday involved in a minor car accident on his way to training.

The 31-year-old Argentine was travelling to Etihad Campus facility centre when his £80,000 grey Range Rover was involved in an accident.
Luckily, the star walked away from the scene unscathed even though the ride was seriously damaged.
Commenting on the event, Sky Sports presenter David Gorrido said: “We understand he is unhurt after being involved in a small car collision, we’ve been told that he’s had a bump this morning.

“It’s been described as a minor plan, but has reported to the CFA – City Football Academy, as well as the rest of the ancestor City squad and we, understand he didn’t need to be checked the by the medical team.”
City travel to Selhurst Park to face Crystal Palace in the evening kick-off on Saturday.