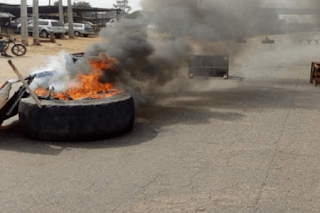 The Independent National Electoral Commission (INEC) has cancelled election in Ologi Ward 03 of Ogbia Local Government Area (LGA) of Bayelsa State in the ongoing governorship election in the state.
INEC’s supervisory resident electoral commissioner for Ogbia, Ukuachukwu Orji, said the decision followed incidents of violence and “seizing” of an electoral official by unnamed persons in the ward.
Orji told reporters that members of the Ologi community forcibly prevented election in the LGA.
“As our people (electoral officers) were coming into the community after crossing the river, they seized them and the materials and burnt all the materials.
“They chased our people away and seized some but the military rescued them,” he said.
Orji spoke in Otuoke Ward 13 of Ogbia LGA where President Goodluck Jonathan and his family voted