Bestie on Bed: Wizkid Kiss Tiwa Savage And Grabs Her Ass On Stage In Dubai (Video) 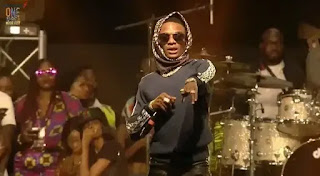 Pop singers, Wizkid and Tiwa Savage, have again entertained fans with another romantic expression during a live performance in Dubai, UAE.
The two entertainers are known for making news during stage performances.

During a performance on Friday night at the One Africa Music Fest in Dubai, Tiwa presented her bum to Wizkid and the 29-year-old did not hesitate.
In videos circulating on social media, Tiwa, 39, dances seductively in front of Wizkid who holds her bum for a few seconds before she leaves and smacks his head jokingly, prompting his microphone to fall.
The duo kissed each other on stage during Star Boy Fest in France in October.
The pair have proven to have some sort of connection during stage performances.