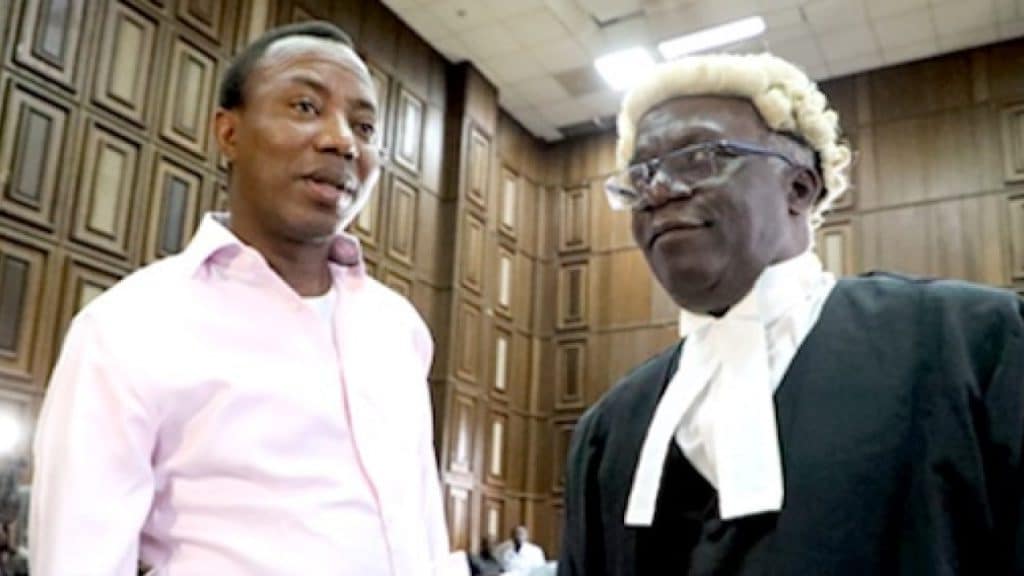 Senior advocate, of Nigeria (SAN) and father of singer, Falz, Femi Falana, says Abubakar Malami risks being removed as the attorney-general of the federation (AGF) if he fails to secure the release of Omoyele Sowore.
Last Friday, Malami took over Sowore’s case from the Department of State Services (DSS), and with this development, Falana, counsel to the activist, asked him to use his office to secure Sowore’s release.
The AGF, however, said he cannot take any decision on Sowore’s release. Responding in a statement on Tuesday, Falana said the AGF has not taken note of the legal implications of taking over the case.
“With respect, Mr. Malami has not taken cognizance of the legal implications of taking over a pending criminal case in exercise of the powers of an Attorney-General under the common law and the Constitution,” the statement read.
“In the case of State v Ilori (1983) JELR 51804 (SC) the Supreme Court dwelt in extenso on the powers of an Attorney-General under section 193 of the 1979 Constitution which is in pari materia with section 174 of the 1999 Constitution. In that case Eso JSC of blessed memory said inter alia:
“An Attorney-General, who proposes to act under his powers to institute and undertake, take over and continue or discontinue criminal proceedings would need to bear in mind public interest, interests of justice and the need to prevent abuse of legal process before he exercises his powers, since if he ignores any of these, he would run the risk of exposing himself to removal or reassignment by his appointor, and above all and this is most important also to public opinion.
“‘The powers of the Attorney-General under s. 191, (and notwithstanding sub-section (3) thereof) are still a matter for his quasi-judicial discretion and one within his complete province. He still possesses the constitutional powers in full and the responsibility for any decision thereupon rests solely on him.
“Since Mr. Malami has taken over the case of FRN v Sowore v Another he is deemed to possess ‘the constitutional powers in full and the responsibility for any decision thereupon rests solely on him.’
Therefore, he cannot like Pontius Pilate wash of his hands with respect to the illegal detention of Sowore by the State Security Service. Furthermore, since section 287 of the Constitution has imposed a legal obligation on all authorities and persons in Nigeria to comply with the decisions of all competent courts the Attorney-General of the Federation, Mr. Malami is duty bound to direct the State Security Service to release Sowore on bail in compliance with the valid and subsisting order of the federal high court.”
Falana also said on legal principle, they are compelled to ask the AGF to direct the DSS to release Sowore without further delay. Sowore, convener of Revolution Now Movement, was arrested in August for planning a nationwide protest.
Despite a court order granting him bail, the activist has been denied his freedom. He was briefly released after 124 days in detention but was rearrested less than 24 hours after, and he has been in DSS custody since this time.