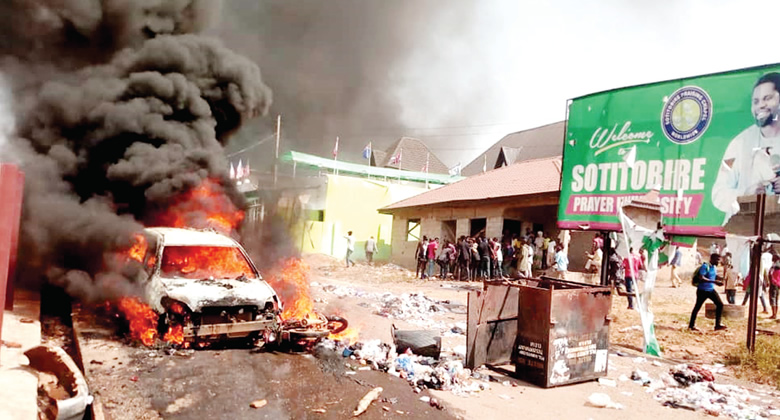 Three persons lost their lives on Wednesday, while several others sustained varying degrees of injury when some youths set ablaze a popular church, Sotitobire Praising Chapel, at the Oshinle Quarter in Akure, Ondo State.

The incident followed the rumoured discovery of the corpse of one-year-old Gold Kolawole, who went missing from the children’s department of the church on November 10.

For several hours on Wednesday, social and economic activities were paralysed in the area following the violence.

Some houses and vehicles purportedly belonging to the church were also set on fire by the irate youths, while a police patrol vehicle was also vandalised.

One of the deceased victims was a policeman, whose identity had not been ascertained.

An eyewitness said, “Since the day the boy went missing, people had observed that the police were not doing any serious investigation on the matter. But when the youth in the area saw that a programme going on in the church on Wednesday, they went there to challenge the worshippers.

“The worshippers resisted the youth, then a fight broke out and the policemen guarding the church attacked the protesters. The action of the police infuriated the youth and residents of the area, who mobilised more people and set the church and its belongings ablaze.”

The eyewitness added that while the protest was going on, a team of policemen arrived the scene and started shooting indiscriminately and stray bullets hit two of the youth, who died on the spot.

Journalists were also attacked by the worshippers, who destroyed their cameras and telephones. The attacked journalists were from the SaharaReporters, Breeze FM and Western Post Newspapers.

Gold disappeared from the church during a Sunday service last month and his whereabouts have remained unknown, with his parents alleging that the police were not conducting a proper investigation into the matter.

A source stated that the residents of the area got angry when some pastors of the church started the morning service on Wednesday.

They reportedly attacked the church and one of the policemen guarding the place of worship was mobbed.

The residents accused the church of not showing concern about the missing child.

It was also learnt that the pastor of the church, Prophet Alfa Babatunde, was in the custody of the Department of State Services in Akure, where he was being interrogated on the matter.

The Police Public Relations Officer in the state, Mr Femi Joseph, who confirmed the death of the policeman and one protester, said the command had drafted more personnel to restore normalcy in the area.

He stated, “We lost one of our men, while another one is critically injured and has been taken to hospital

“The church building was also set ablaze by the irate youth. Some of our officers despatched to the scene to contain the situation were pelted with stones, with many of them sustaining injuries. Their patrol vehicle was also badly damaged.

“The public should not be deceived by reports that the command has abandoned the investigation of the boy’s disappearance as the case file is already on the way to the office of the Director of Public Prosecutions in the state for legal advice. Notwithstanding this latest incident, more reinforcement has been sent to the scene to contain the situation.”