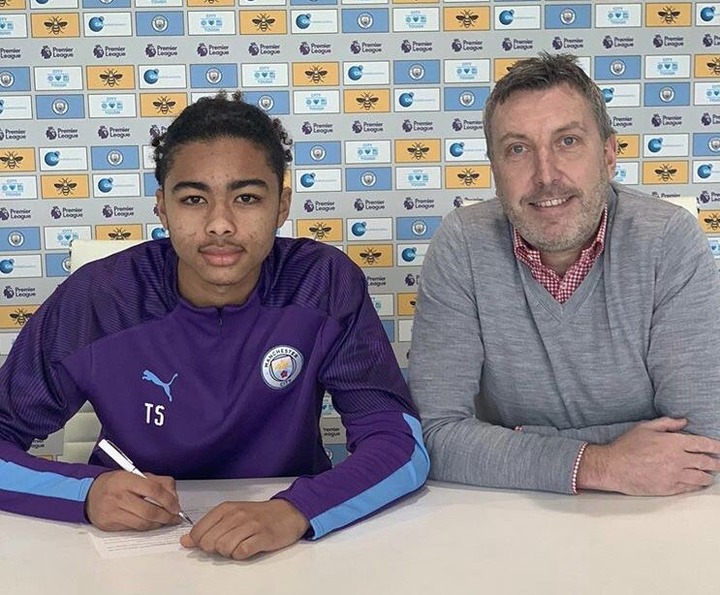 Camron Gbadebo has successfully completed his switch to Manchester City – The highly-rated defender joined the English champions from Leicester U-18 academy – At Man City academy, Gbadebo will join Flying Eagles invitee Fisayo Dele-Bashiru Manchester City have completed the signing of highly-rated Nigerian-born star Camron Gbadebo from Leicester City for an undisclosed fee.
The 17-year-old centre-half defender made a successful switch from Leicester City U-18 academy to Etihad Stadium following his successful trial. Gbadebo made 11 appearances for the Foxes Under-18s after joining in the summer of 2018 and made his last appearances for the former English champions during a 5-1 victory against Swansea City in October. After completing his move to Manchester, the young prodigy could not curtain his excitement as he went to photo-sharing platform Instagram to announce the next challenge of his career.
“I’m so happy to announce that I’ve signed for @mancity,” Gbadebo wrote on Instagram.
“Thank you to every one that has supported me on my journey so far. This is only just the beginning!” Gbadebo, a product of Kinetic Foundation Academy in South London which produced Nigerian stars Joe Aribo and Josh Maja, had a brief stint Crystal Palace and Watford.
At Man City Academy, the respected defender will join Flying Eagles invitee Fisayo Dele-Bashiru, Felix Nmecha, Nathanael Ogbeta, Gavin Bazunu, Samuel Edozie and Timi Sobowale.