Angry landlord kills his Tenant for sleeping with wife in ibadan 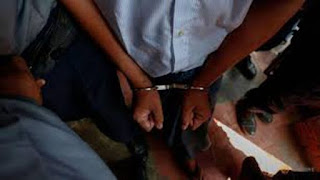 Tenant Sleeping With Landlord’s Wife In Ibadan Learns The Hard Way…See
What Happened
A 50-year old landlord living in Amuloko area, Ibadan, Oyo State who was arrested and arraigned
by the Police, has pleaded guilty before the Court for killing his own tenant for allegedly sleeping with
his wife whenever he is not around.
According to reports, the landlord claimed that Raja, as the deceased is popularly called, has been secretly sleeping with his wife. However, the wife claimed that Raja was only showing her sexual favour because her husband usually travels for several weeks without touching her.
The deceased, who was reported missing on the 27th November,
2019, by family and friends, was found in a nearby bush in the
same residential area. Residents of the area reported a bad smell
in the region to local Police authority, which led them to thoroughly search the bush where
the body was eventually found with several machete wounds.
Medical reports equally confirmed
that the late Raja died from profuse bleeding.
Thereafter, the Police intelligence team commenced a rigorous two weeks investigation and fact
finding. The wife of the landlord confessed willingly that her husband could have been the culprit.
When asked why she suspected him, she revealed that the tenant has been offering her sexual
favours since the husband is usually not available and always
travelling on business trips.
The representative of the Police told the public that they swung
into action after getting this information and made enquiries from other tenants. It was gathered that a thorough search of the landlord’s bedroom helped to find out what could have been the weapon he used.
The man was arrested and further interrogation revealed that he planned on killing the tenant after
he allegedly caught him with his wife at a hotel, where they usually meet.
He pleaded that he did not intend to kill the deceased on the fateful day but Raja got violent and he
had to defend himself, which led to his death.