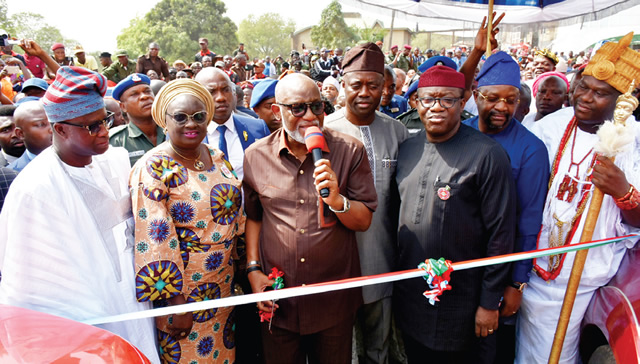 Traditional rulers in Ondo State has called on governors in the Southwest to ignore negative comments about Operation Amotekun and conclude necessary arrangements for the immediate take – off of the security outfit in the six states of the zone .
The monarchs, under the umbrella of “De 130 Krown Obas ” , spoke through their state president, the Owa – Ale of Ikare-Akoko , Oba Kolapo Adegbite – Adedoyin, while briefing newsmen after their monthly meeting , held in Akure on Friday.
The traditional rulers enjoined the Federal Government to support Southwest governors to achieve the set goals of Operation Amotekun .
According to Adegbite – Adedoyin, it is only when the security outfit is allowed to function effectively that traditional rulers and their subjects can be able to sleep with their two eyes closed.
Adegbite – Adedoyin said that the security outfit must be supported to end the rampant kidnappings , banditry , senseless killings and other crimes in the zone .

He said , “We , as the executives and members of “De 130 Krowns Club of Ondo State ” , are the main stakeholders in the spate of armed robbery , kidnappings , banditry , killings by slaughtering and so on , and this “epidemic” is affecting our subjects .
“We do solemnly declare our support for “Operation Amotekun ” to counter all these ungodly and inhuman acts of self -destruction .
“The personnel of “Amotekun ’ are our native hunters and all who know and understand the terrain of their own localities . What is wrong in watching over ourselves ?
“We plead with our governor to do this quickly and “Amotekun ” should start operation immediately so as to relieve us, the traditional rulers , particularly in Ondo State , of the act of losing our kinsmen and their properties on daily basis . “
They urged other zones in the country not to see the security outfits as a political body but one to complement the existing government ’ s security agencies.
“We plead with our politicians , who are from other zones not to see this outfit as a political body , but as supplementary efforts to the Federal Government ’ s laudable efforts to protect the lives of innocent Nigerians in the Southwest. “
( NAN)

0
Previous post Busted: EFCC arraign Yomi Sars and sibling to court in abeokuta
Next post Check out this sexy wooden chair that will get any man to look twice,made in Imo state
Admin