Cutting off the human Head and Replacing it with another Head,See The World’s first human head transplant  (Video) 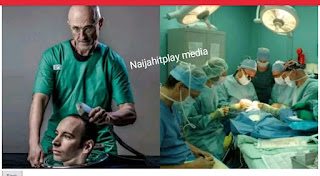 The world’s first human head transplant has been carried out on a corpse in China, according to a controversial Italian doctor who said Friday that he and his team are now ready to perform the surgery on a living person.
Dr. Sergio Canavero, chief of the Turin Advanced Neuromodulation Group, said the operation was carried out by a team led by Dr. Xiaoping Ren, who last year successfully grafted a head onto a monkey’s body.

Professor Sergio Canavero gestures as he speaks to the media during a press conference in Glasgow, Scotland.

“The first human transplant on human cadavers has been done. A full head swap between brain-dead organ donors is the next stage,” Canavero said at a press conference in Vienna, the Telegraph of the UK reported .
“And that is the final step for the formal head transplant for a medical condition which is imminent,” said Canavero, who gained a mix of fame and notoriety in 2015 for his Frankenstein-like plans to achieve his feat within two years.
Canavero said the successful transplant by the surgeons at Harbin Medical University shows that his techniques for reconnecting the spine, nerves and blood vessels to allow two bodies to live together will work.
Although Russian computer scientist Valery Spiridonov, who suffers from a muscle-wasting disease, volunteered to become the first head transplant patient, the team has said the first recipient will likely be Chinese, because the chance of a Chinese donor body will be higher.

0
Previous post Check out this sexy wooden chair that will get any man to look twice,made in Imo state
Next post JUST IN: Leah Sheribu Gives Birth To Baby Boy For Boko Haram Commander After Being Forced To Convert To Islam
Admin