I Can Raise Kobe Bryant and his daughter, If 10 Percent Of His Net Worth Is Given to Me – Prophet Nigel Gaisie Declares 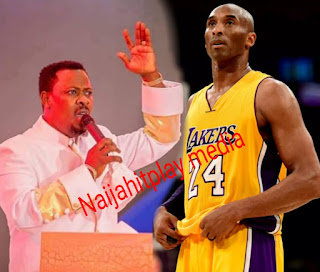 The man of God while preaching and prophesying to his congregations said he is capable of raising Kobe Bryant and his daughter from the dead.

However, there are some conditions to his offer. According to the self-proclaimed man of God, he can only do so if 10% of Kobe’s net worth is given to him.

“The Lord just took me into the spirit world, and I have seen a great man fall.

This news will shake the entire world because of how great this man is. I see a lot of people on social media talking about the man for weeks to come and I see a lot of sad faces.”

“America will mourn this great man. The Lord then instructed me to announce to the family of this man, the American embassy in Ghana and the entire world that He the Lord has not sanctioned the death of this man.

He again said to me, ‘Nigel, tell the family of this man and tell the entire world, should they agree to pay my tithes and offerings I will use you as a vessel to bring this man and his daughter back to life.’”

Prophet Nigel asserted that without the 10% offer, there was no way he could bring the man and his daughter back to life because that was the instruction from the Almighty God Himself.

“The man is worth 500 million dollars and should the family agree to give 10% of his income to me, I will bring them back to life. Thus sayeth the Lord! Without the money, I cannot bring him and the little girl back.”

Prophet Nigel Giasie after making these declarations asked his congregation to pray in tongues and thank the Lord for wanting to use him and their church for such a great miracle.

He went on to admonish the congregation to make sure the message reaches the American consulate in Ghana, the family of the late Kobe Bryant, and also warned his congregants not to doubt the words of Almighty Jehovah or else face some serious repercussions.

0
Previous post Germany’s Cabinet endorse ban on gay, transgender ‘conversion therapy’
Next post Fact you should know about Prophet Nigel Gaisie,The Ghanian Pastor who Promise to Raise Kobe Bryant and his daughter from The dead for Money
Admin