See the List Of Popular Nigerians Who Died Of Cancer 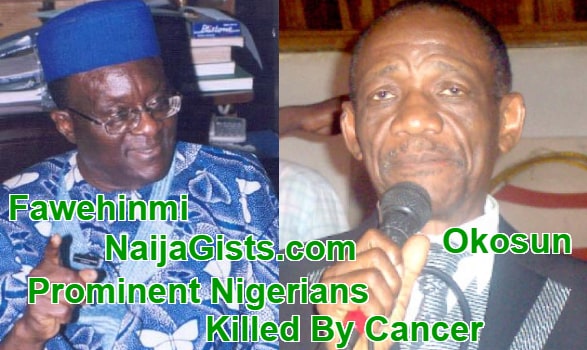 According the World Health Organization, at least 80,000 Nigerians die annually from various forms of cancer .

Here are top Nigerians who died of cancer as the world marks World Cancer Day today Tuesday the 4th of February 2020.

Sonny Okosun
For Sonny Okosun, one of greatest musicians, the music stopped playing when he died on May 24, 2008, at 61 in the United States after a prolonged battle with cancer. He had gone to seek medical advice on his deteriorating health.

Gani Fawehinmi
The doggedness with which renowned activist and social crusader, Gani Fawehinmi fought successive and oppressive military dictators was not enough to survive the monster called cancer.
He died on September 5, 2009, of lung cancer.

Dr. Olusola Saraki
Second Republic Senate Leader, Dr. Olusola Saraki, also died of cancer as confirmed by his youngest son, Olaolu, who admitted that political giant of Kwara politics “battled cancer for about five years” before he breathed his last on November 14, 2012.

Clara Oshiomhole
Clara, the wife of the Chairman of the All Progressives Party (APC), Adam Oshiomole was also said to have died of cancer on December 8, 2010, eleven days to her daughter’s wedding.

Yinka Craig
For two years, ace broadcaster, Yinka Craig, who made his name with Nigerian Television Authority (NTA) battled to stay alive until September 23, 2008, when he died at the Mayo Clinic, Rochester, Minnesota, United States of America. He received treatment for cancer of the immune system.

She had to leave behind her Better Life Programme for Rural Women which launched many co-operatives, cottage industries, farms and gardens, shops and markets, women’s centres and social welfare programmes.