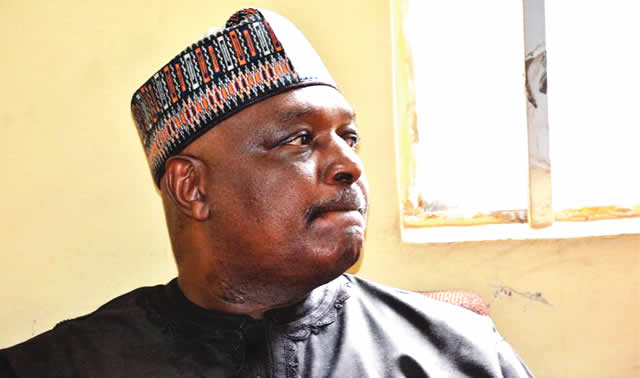 The Supreme Court on Friday affirmed the conviction and sentence of a former Governor of Taraba State, Jolly Name, to 12 years imprisonment for N1 . 6 bn corruption charges.
But a five-man panel of the apex court led by Justice Mary Peter-Odili , in its unanimous judgment , set aside the N100 m fine imposed on him by the Court of Appeal .

Delivering the lead judgment of the court on Nyame ’ s appeal , Justice Amina Augie , held that the Court of Appeal was wrong to have imposed the fine on him without hearing from the appellant .
“The lower court ought to have heard from the parties, especially, the appellant who appealed for the reduction of the sentence imposed by the trial court , before imposing those fines on him , ” Justice Augie ruled.
She , however , affirmed the guilt and conviction of the ex -governor by upholding the Court of Appeal ’ s reduction of the 14 years ’ imprisonment to 12 years .

The judge, who held that the ex -governor ’ s appeal succeeded in part , ruled saying, “Allowing the appeal in its entirety is a tall order , but there is no question that the fines were a nullity ”.

Nyame ’ s appeal was against the November 16, 2018 judgment of the Abuja Division of the Court of Appeal which had affirmed Nyame ’ s conviction by the High Court of the Federal Capital Territory, Abuja .
Justice Adebukola Banjoko of the FCT High Court had on May 30, 2018, convicted Nyame on a total of 27 out of the 41 corruption charges involving about N1 . 6 bn preferred against him by the Economic and Financial Crimes Commission .

The misappropriated funds included ecological funds , those earmarked for grains and a presidential visit.
The former governor was convicted and sentenced to various terms of imprisonment with the highest being 14 years for offences bordering on criminal breach of trust , criminal misappropriation , taking valuable thing without consideration and receiving gratification as a public officer .
In its judgment delivered on November 16, 2018, the Court of Appeal affirmed the guilt of the former governor .
But citing section 416 ( 2 ) of the Administration of Criminal Justice Act 2015 which prohibits the imposition of maximum sentences on first offenders , the Court of Appeal reduced the 14 years ’ imprisonment to 12.
In addition to the 12 years ’ sentence , however , the Justice Abdul Aboki -led panel of the Court of Appeal imposed a fine of N100 m on Nyame , a punishment the trial court had omitted in the judgment delivered on May 30, 2018.
The former governor had appealed against the judgment of the Court of Appeal .
At the Supreme Court ’ s hearing of the appeal on November 14, 2019, Nyame ’ s lawyer , Ahmed Raji , SAN , urged the court “to allow the appeal ”.
But the counsel representing the EFCC , the respondent , Mr Rotimi Jacobs , SAN , backed by Oluwaleke Atolagbe , urged the court to dismiss it.
While the apex court , in its judgment on Friday , affirmed the ex -governor ’ s guilt and his sentencing to 12 years ’ imprisonment , it nullified the N100 m fine imposed on him .

0
Previous post Inside life, 13year old girl got impregnated by her 10year old boyfriend, see the young couple (Photos)
Next post Will ighalo be the first Nigerian to score for Man U as he is set to play his first match against Chelsea?
Admin