Will you dump him if he loses his Manhood (Pen*s)? – Let Gist 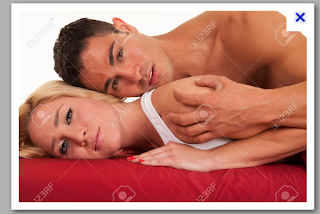 If you’re not sexually compatible with your partner, it’s going to put a huge strain on your relationship. Goes without saying that sexual satisfaction is really important in keeping both people happy. But what happens if your man suddenly loses his libido or has a sharp drop in his performance level? Will you give him the elbow?!

Opinions are really divided on this. It’s easier for a woman to fake orgasm – what with different lubricants that make penetration easy when she suddenly become dry. But, apart from the expensive Viagra, no magic pill will make a man rise to the occasion when he doesn’t feel like it.
“Why would the woman stay with someone who’s not in sync with her sexually?”, asked Mfon, 45, who runs a fairly successful catering outfit. “She’d be better off trying to find someone she’s better matched with. Life’s too short to be unhappy with a partner who isn’t giving you what you need in the bedroom.
“People say relationships are about compromise, but if one person feels they’re not getting enough nookie, it could lead to disaster. They might cheat, thereby breaking the trust between them. The person who wants more sex might also feel rejected, which could lower their self-esteem and confidence. They may end up beating themselves up over why they’re always being turned down. I know I would. Don’t get me wrong, cuddles and kisses are great, but women need to feel desired.
“A pertinent question when faced with this dilemma is: Would your partner make the same sacrifice? Men in particular have a very short fuse when dealing with frigidity. After a couple of kids, you wouldn’t expect your partner to be as hot as when you first met. But you hear of men who look for passion elsewhere instead of helping their wives or partners regain their libido. One of such husband explained his reason for taking a second `wife’ was because she has a better `fit’ when they make love than his legal wife!

“It makes sense for a person with a low libido to be with someone similar because they won’t have to feel guilty about constantly shunning their partners advances. If couples are at opposite ends of the scale sex-drive-wise, I reckon it’s time to call it a day”.
Joy, a 39-year-old beautician, disagrees with Mfon. According to her, sex is not be-all and end-all of a relationship. Being part of a couple is about supporting one another emotionally, loving each other and just enjoying one another’s company. Sex seems important at the start, but once a relationship develops, it usually takes more of a backseat. Things like having shared interests, similar values and even the same sense of humour are more important than having in-sync sex drives.
“It’s a bit heartless for someone to up and leave over something so superficial as her partner’s low libido. No one’s perfect, nor is anyone’s relationship. Lots of people go off sex for a variety of reasons. Hormones, stress, depression or just tiredness can all lead to a lower sex drive. Often, life simply gets in the way of sex – that’s just the way it goes. We’re human beings not machines that run on a battery and perform on demand. There are ways to feel intimate without intercourse, like talking and spending quality time together. As long as a person feels loved and appreciated, that’s all that matters.
“These days, people are too quick to throw in the towel when it comes to relationships. Sex drives don’t have to match to work for a loving couple. Like anything, compromise is the key”.
That ‘Compromise’ is what Yemi emphasise when asked to tackle the topic. A university lecturer, he said one has to be realistic when discussing sexual compatibility in couples. “We all know there’re too much sex out there”, he said. “Married or single, you have sex being dangled at you right left and centre. Even if you have a good thing going with your partner, temptations abound claiming loads of victims.
“Lecturers have already been given a bad name, so I won’t go there. But on campus, you see young married mothers freely having affairs with matured students. Are they doing so because the husbands’ libido suddenly falls? Outside the campus, you go to all these club houses and see members on the prowl, some go as low as having heated arguments over kitchen female members! Let’s face it, you can hardly find a couple whose libido is at sync. I’m not advocating outright infidelity, but if a little thing like making yourself happy `outside in an almost sexless relationship, what’s the harms?

These days, men and women look the other way whilst their partners go on their sexual adventures – as long as the home front remains relatively undisturbed!”

If I have sex can I catch coronavirus? You might have thought about it but been too embarrassed to ask.To...

His he not satisfing you? See 5 Easy ways to tell your husband he’s bad in bedIn marriage, there will...

5 ways on How To Take Care Of Your Vagina After Giving Birth - Must read for all womenAfter giving...

Lack of money and sex responsible for most broken homes – Couple married for 65 years Gives their best advicePa...

Is he cheating on you? See the Top 5 easy Way To Catch A CheaterDo you suspect that your better...

See how low sex can link to early menopause - Study, a must read to all womenResearchers in a new...