Dangote Cement truck loaded with cement on Saturday morning at Sango toll gate in Ogun State has claimed the lives of passengers with others in critical conditions.
Naijahitplay media yet to confirm total numbers of death passengers but eye witness said 14 passengers including the driver were killed at the spot. 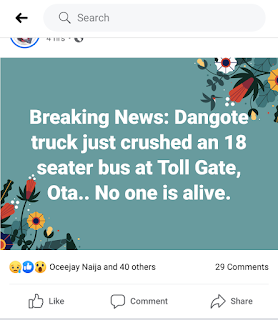 It happened that a Dangote Truck loaded with cement has run over an Voltswagen LT 35 bus carrying passengers.

The bus and the truck were coming from Sango-OTA side, moving towards Lagos.

It occur that the brake of the Dangote truck is not 100% active when the driver applied it, which lead to the truck to hit the bus in his front.

This has serious accident. The passenger inside the bus were injured, and they were rushed to the hospital.
The driver of the truck was rescued by FRSC Officer and Police, because some Thug has been trying to injure him.