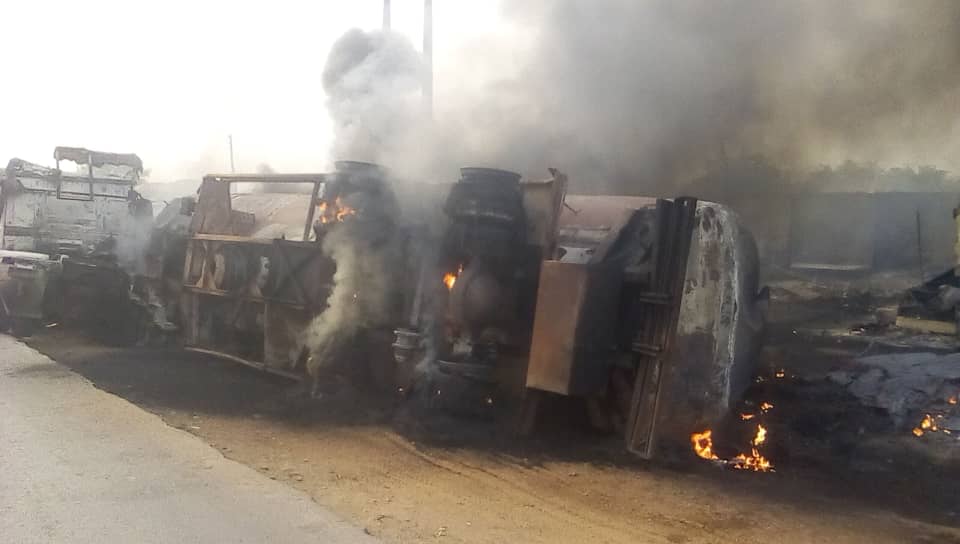 The victims who were a mother and daughter of a village head in the area including a vulcaniser were rushed to the Federal Medical Centre , Idi -Aba, Abeokuta .

About five houses and several shops reportedly got burnt to ashes in the incident that occurred on Friday evening .

An eyewitness identified only as Mrs Olufote told Saturday PUNCH that the incident happened when a fuel tanker suffered a flat tyre .

She said the driver parked beside the road to fix the flat tyre unaware she was parking at a sloppy area .
She added that as he alighted from the vehicle to negotiate with a vulcaniser beside the road , the tanker tilted and the container fell.
She identified the victims as Ashimiyu Otunba ( vulcaniser ) , the woman as Risikatu Otunba and the daughter whose name could not be ascertained as of the time of filing this report .
The spokesperson for the state Traffic Compliance and Enforcement Corps , Babatunde Akinbiyi, confirmed the incident.
Akinbiyi said the fire was later put out after some houses had been burnt to ashes.
He said the tanker driver mistakenly parked at a sloppy place while fixing his vehicle’ s tyre . According to him , the container detached from the hook , fell and exploded .