It Is To Big!! 32-year-old virgin seeks divorce over husband’s huge manhood 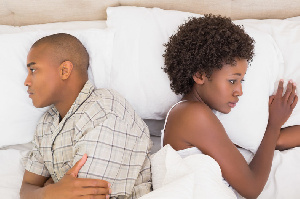 A 32-year-old virgin has described her wedding night as a nightmare due to the size of her husband’s manhood.
Ama [pseudo name], who hails from Sefwi Bekwai in the Western North region, is said to have rushed from their room in tears when her husband attempted to consummate the marriage.
The young lady is said to have been traumatised after the first unsuccessful romp.
Mother of the lady in an interview said she sympathises with her daughter.
She claimed per the description given, it was obvious her husband’s manhood is big both in depth and size.
“My virgin daughter is traumatised; she wants a divorce and as I mother; I feel her pain,” she bemoaned.
When reached for comments, the well-endowed husband did not deny the accusation.
He is, however, ready to grant the divorce if his dowry and money spent during the wedding are paid back.