See how a young man was electrocuted to death In anambra  A middle-aged man identified as Nduka Emeziagbala, died on Friday, at the Enugwu-Aged community in Anambra in circumstances suspected to be electrocution. 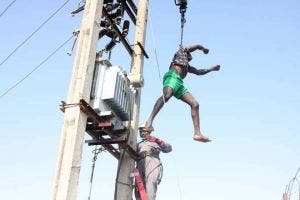 Information Nigeria gathered that the deceased was believed to have had contact with something bearing electricity current while on the branches of a breadfruit tree under electricity high tension cable in the community.

An eyewitness said that the deceased was given the job following the warning by Enugu Electricity Distribution Company (EEDC) on the dangers of the tree. According to the eyewitness  “In the process, the young man was hired to cut down branches of the tree because of the repeated warning from officers of the EEDC,” the source said.  Another source, who said that the incident had thrown the entire community in Njikoka Local Government Area into the morning, described the deceased as “a quiet young man, who cared for his mother more than his siblings’.

0
Previous post God and my hardworking team gat my back to see Me becoming bigger than, wizkid, Davido, Burna boy and fire boy – Gnewz
Next post If you divorce your wife, you must forfeit your house to her, see the new court rules in Nigeria
Admin