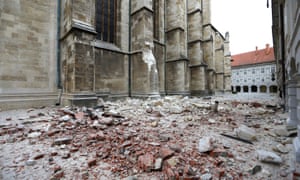 Zagreb hit by earthquake while in coronavirus lockdown

A strong earthquake has shaken the Croatian capital, Zagreb, bringing much of the population on to the streets after social distancing regulations to prevent the spread of coronavirus had been put in place.

The quake, which struck shortly after 6am local time on Sunday, caused widespread damage, including to the city’s cathedral, and the evacuation of hospitals. A 15-year-old was in a critical condition and 16 others were injured as a result of the quake, Croatian authorities said on Sunday afternoon.

The epicentre was 4 miles north of Zagreb, 6 miles above the centre of the 5.3-magnitude earthquake, which was followed by a number of smaller tremors. The prime minister, Andrej Plenković, said the earthquake was the biggest in Zagreb in the last 140 years.

Many buildings in the capital cracked and walls and rooftops were damaged. Streets were littered with debris. Concrete slabs fell on cars and chimneys landed in front of building entrances.

The health minister, Vili Beroš, urged people to keep comply with social distancing measures even as they were trying to deal with the quake damage. “Earthquakes are dangerous but coronavirus is even more so,” he said.

Croatia has had 235 confirmed cases of coronavirus to date. In measures aimed at halting the spread of the virus, Croatians had been told to avoid public areas such as parks and public squares and much of Zagreb’s public transport network had been closed.

On Sunday Plenković urged people to remain calm and stay outside their homes in central areas of Zagreb, which sustained the most damage. “We have two parallel crises that contradict each other,” the prime minister said after an emergency meeting of Croatia’s top officials.

Footage showed mothers dressed in nightgowns hugging their newborn babies in a car park in freezing temperatures after a damaged maternity hospital was evacuated. The women and children were moved along with incubators to a new location with the help of the army.

The top of one of the two spires of Zagreb’s cathedral collapsed. The structure had been rebuilt after it toppled in an earthquake in 1880.

The speaker of Croatia’s parliament, Gordan Jandroković, said damage to the parliament building meant sessions would be postponed. “The damage is quite extensive. Walls and stairways have cracked on the upper floor and one section of the roof has been destroyed,” he said.

Soldiers wearing masks helped in efforts to clear rubble from the streets of Zagreb. Officials toured the damaged areas as some citizens criticised authorities over the poor state of buildings in the old part of the city, some of which date back to the 19th century.

• This article was amended on 23 March 2020 to clarify the difference between the epicentre and centre of the earthquake.

0
Previous post See how nigerian 419 are using corona virus news to defraud and scam people ,over govt free money
Next post Here are the countries that have so far confirmed coronavirus cases
Admin