Akin Abayomi, Lagos commissioner for health, says complaints by Nigerians on medical attention provided at isolation centres is as a result of lack of preparedness for the nature of the centres.
A video which went viral on social media showed a man, who identified himself as Alamatu, lamenting about the mode of operation at the isolation centre in the state.
In the video, he said a member of his family, a female, had not seen a doctor or nurse since she arrived at the centre.
He added that the patient had also not been fed despite her condition.
“My name is Mr. Alamutu. What the hell are they doing here. She hasn’t seen a doctor, she hasn’t seen a nurse, she hasn’t been fed and you’re telling me I should not take here out. Let her go and die in my house. Simple, I don’t care anymore,” he said.
Reacting to the claims at a press briefing on Tuesday, Abayomi said the mode of operation at the isolation centre is different from that of a hospital ward.
He said it often takes a few days for patients to adjust to the measures, adding that most people find it strange to see other people a few times in a day.
“It takes a few days for the patients to get accustomed to isolation centres and that is why it is called isolation,” he said.
“For about one or two days, patients will always complain on social media that nobody is doing this, I haven’t seen anybody. That is not correct. They are just not accustomed to seeing people for few minutes a few times a day. It is totally different from a normal ward.
“After about two days, the patients become accustomed to that and then they settle down. They start interacting with other patients in the ward, they make friends and if you have listened to the testimonies that have been released, they thank the government.
“They make a lot of good comments, they are happy that they are well and they have finally understood what isolation means.” 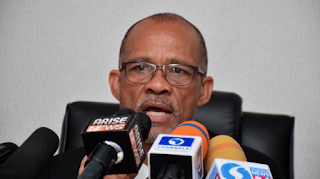