The University of Ilorin Teaching Hospital (UITH) has suspended Alakija Salami, a senior consultant at the hospital.
Salami was suspended over the controversy surrounding a COVID-19 patient who died on April 3, 2020.
The hospital authorities had been accused of covering up the circumstances that led to the death of the patient, a UK returnee.
But Abdulrahman Abdulrasaq, the governor, had attributed the controversy surrounding the case to lack of full disclosure, which he said was a breach of protocol.
At a media briefing, the governor had said his administration was expecting the outcome of the internal investigation of the incident by the UITH before taking further steps.
Two cases of the disease were later confirmed in the state. One is the wife of the late UK returnee while the second case is another UK returnee.
In a statement issued by the hospital on Monday night, David Odaibo, UITH director of administration, said the management approved Salami’s suspension “as a result of his conduct in the management of a COVID-19 patient”.
“The Management of University of Ilorin Teaching Hospital hereby suspends Prof A.K. Salami as a Senior Consultant in the hospital. This is as a result of his unethical conduct in the admission, management and eventual release of the corpse of a suspected COVID-19 patient who died in the hospital on the 3rd of April, 2020,” he said in a statement. 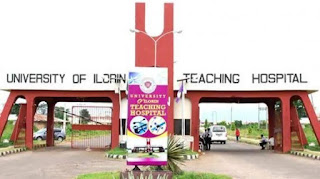