Admin
Facebook
Twitter
Pinterest
LinkedIn
Read Time:1 Minute, 35 Second
The Nigerian Government has shut down Med Contour following reports of a failed surgery .
The Federal Competition and Consumer Protection Commission ( FCCPC ) today sealed the Lagos office of Med Contours in furtherance of an open investigation into complaints and dissatisfaction with respect to certain elective /cosmetic surgical procedures carried out by the firm .
“ In furtherance of an open investigation, on reasonable suspicion of illegal activities ( S . 18( 1) FCCPA) , FCCPC today sealed Med Contour in an abundance of caution & consumer safety pending further inquiry, ” FCCPC said on Wednesday.
The government agency had in a statement by its chief executive officer Babatunde Irukera said it had commenced investigations after it became aware of complaints with respect to “ unprofessional ” and “ potentially injurious ” elective /cosmetic surgical procedures by Med Contour.
“ The allegations are that Med Contour engages in conduct that is considered otherwise unprofessional, misleading and potentially injurious , including resulting in possible fatalities , ” Irukera said .
This was following an outrage on Twitter last week after calls for the arrest of Dr Anu of Med Contour following a botched surgery on a Twitter influencer known as Omohtee.
In a video shared online , Omohtee encouraged women to love their body and urged women who insist on undergoing plastic surgery to avoid Med Contour .
“ If I die , let it be known that Dr Anu of Med Contour killed me , ” she said in one of her tweets .
Dr Anu, in her defence, said that her offence was that Omohtee ’ s waist was too tiny .
“ So apparently my offense is that her waist is too tiny . At the expense of another persons name and profession some people just want their posts to trend…this is really sad. I leave this lady to God . . let Gods will be done . ”
FCCPC said it will look to gather additional information from consumers with previous experiences with Med Contour or its operatives, whether the experiences were satisfactory or otherwise . 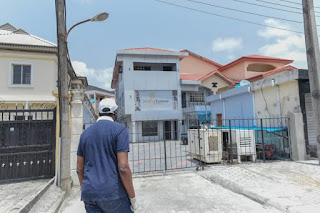